GLAA homes in on Lincolnshire 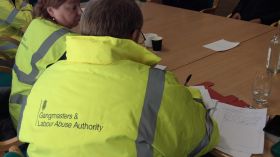 The Gangmasters and Labour Abuse Authority (GLAA) has conducted unannounced compliance inspections in Lincolnshire to check on agency workers’ welfare and tackle any potential unlicensed activity.

In total, 24 agency workers were interviewed, covering areas such as their working hours, conditions, pay, holiday entitlement, and accommodation. GLAA said it did not find any evidence of violations in its investigations.

Lincolnshire and the east of England more widely is a key region for the GLAA due to its high levels of agricultural, food processing and packaging work, all of which requires licensed labour providers. The area is a heartland of vegetable production.

Using its compliance powers, the GLAA can carry out inspections and revoke licences if licence holders are deemed to be not adhering to the regulations. If anyone is found to be operating as a gangmaster without a licence, the GLAA will take enforcement action, with the penalty for acting as an unlicensed gangmaster as high as 10 years in prison and an unlimited fine.

GLAA head of compliance Martin Jones said: “The visits first and foremost were organised to check that potentially vulnerable workers are not being exploited in our regulated sectors and are getting paid what they deserve.

“I’m pleased that the interviews were all positive and that the workers are happy with their labour providers.

“We hope this visible operational activity acts as a deterrent to anyone who was considering flouting our regulations and ignoring our licensing standards. We will find out and we will use all available tools to ensure that you cannot continue to work in our regulated sectors."