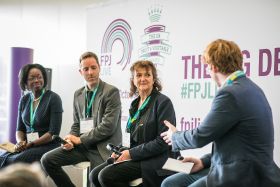 The production and sale of biofortified fruit and vegetables, whereby changes are made to a product’s traditional growing methods that boost its macro-nutrient content, would improve the health of the nation since most meals consumed in the UK lack nutritional diversity and 50 per cent of the food we eat is processed, said Drummond.

“It’s such a lost opportunity if we don’t use biofortification,” she said. “Produce with higher nutritional content could be used in schools, hospitals, care homes. The real challenge is the regulation and overcoming consumer mistrust about what is being done to the produce. The only thing currently allowed to be fortified in the UK is flour.”

Bray, who published a report on the benefits of biofortification to human health last year, said other countries already produced crops with higher nutrient values to overcome specific domestic health issues, such as increased beta carotene in sweet potatoes to combat sight loss.

However, Lee Abbey, NFU chief horticulture adviser, said fortifying vegetables is not the answer to improving UK consumer health, and instead boosting fruit and vegetable consumption is the key.

“If we could make fruit and vegetables increasingly nutritious, people might use it as an excuse to eat less of them, and more of something else,” he said. “It is critical we promote increased consumption.” Retailers play a fundamental role in promoting fruit and vegetables, but aren’t doing enough, Abbey added.

“Retailers are failing to do those vital ‘nudges’ in store or online to boost buying,” he said. “Next to fresh pasta, for example, why not have a suggestion to eat with salad, or have the salad next to it? Selling more produce is key to improving consumer health,” Abbey said, “and retailers have a big part to play.”