Kevin the Carrot back for Christmas 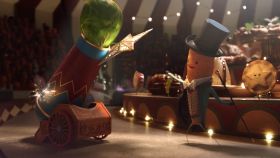 Aldi's cartoon hero Kevin the Carrot has returned to screens in his latest big adventure.

The ad sees Kevin captured by the gang, who feel like he's stolen Christmas from them. He's forced to escape, whereafter he puts on a spectacular show inside a big top that showcases Aldi's Christmas food and drink range.

Other returning characters include Katie and the kids, alongside a bunch of new faces and a performance of a famous musical number.

Sean McGinty, marketing director at Aldi UK, said: “We’re all thrilled to see Kevin back on our screens again, getting up to his usual tricks. Kevin’s popularity grows every year and he’s becoming something of a national treasure! Kevin’s magical Big Top is the perfect environment to showcase the amazing quality of the Aldi Christmas range of food and drink this year.”