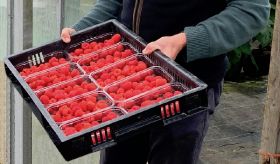 The Malling Bella variety was launched in 2017

Maidstone-based soft fruit grower Chambers is celebrating a double win at the National Fruit Show last month, having been awarded a second and third prize for its Paris and Malling Bella raspberries respectively.

Originally bred in France, Paris is a sweet, juicy and larger-than-average berry of 5-6.5g, with a uniform, short, conical and slightly rounded shape, according to the producer.

The primocane variety, which is firm and has a long shelf life, is also “very tolerant” to the main raspberry pests and diseases which helps boost yields.

“Paris not only performs in terms of aesthetics, flavour and yield, it also enjoys an extended growing season, with the crop being harvested as late as October in the field, and up to December under glass,” said commercial director James Miller.

“Clearly, being able to deliver a British product so late in the year is an appealing proposition for the industry and underpins Chambers’ commitment to – wherever possible – reducing the carbon footprint.”

Malling Bella, meanwhile, was first launched in 2017 and is a product the East Malling Rubus Breeding Consortium, of which Chambers is a founding member.

“It is a vigorous, mid-season primocane fruiter, providing large, easy-to-pick berries,” the producer said. “Malling Bella delivers heavy yields and is suitable for double cropping and long-cane production. The resulting fruit is of an excellent quality, with consistent flavour and a long shelf-life.”

Miller added: "As a grower that works closely with the multiples, we are constantly striving to meet the increasingly discerning demands of today’s consumer.

“This can sometimes be in the guise of a new variety, but we also stand firm with some of the more traditional varieties – such as Paris – which continue to epitomise the best in class, as demonstrated by our success at this year’s National Fruit Show.”