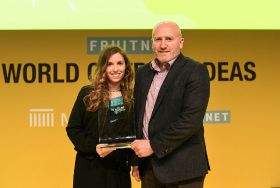 M&S’ Merchandising award comes after a five month overhaul for the British supermarket across four of its stores, reimagining the ways in which fresh produce can be presented to shoppers.

On receiving the award, Leanne Wilkinson, store environment and design manager at M&S, said: “We’re proud of what we have delivered, in four stores in the space of five months. The pace at which we have done this showcases our transformation at the moment.

“It’s a great example of what happens when you work collaboratively from our suppliers to our retail stores. We couldn’t have done it without the people involved in marketing, categories, and our store teams.

“It’s still really early days, we have done four stores with many more to come. We hope to continue to innovate and inspire our customers to shop our fresh produce in new ways.”

A spokesperson for M&S told FPJ that initial customer feedback for the stores had been positive.