Professor Louise Fresco, president of the executive board of Wageningen University, says meat must be part of future diets 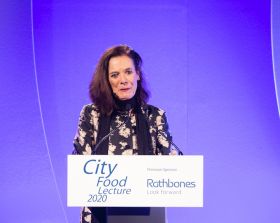 Delivering her speech as keynote speaker at this year’s City Food Lecture, in London, Fresco warned that despite real environmental concerns, animals will still play a vital role in the food chains of the future.

The popular Dutch scientist, academic and broadcaster, called for a reduction in meat consumption to around three times a week, as well as for fish, while suggesting that current meat alternatives and vegan products cannot yet replace the nutritional value of meat, nor its role in the food chain.

“Chickens and pigs can do something that we cannot also do: these animals can recycle our food waste… Eat an apple and you know you cannot eat 100 per cent of it. There is a tremendous amount of waste. Waste is far higher than we expected, based on the latest figures we leave as much as 500 calories per person worldwide, leftover, lost, damaged or not consumed.

“If we could use that to feed animals, that then provide us with other nutrients then we would be a lot better off.”

In contrast to widespread concerns about the effect of beef production on carbon emissions and biodiversity loss, Fresco said: “It wouldn’t be easy to do away with animals, you would still be left with lots of greenhouse gases.

The rise of meat alternatives and plant-based products has been one of the biggest stories in the fresh produce industry, yet Fresco said they are no panacea to global food insecurity and health.

“If we don’t eat much fish and meat, where are the proteins coming from? Plants are not as easily digestible because they contain more fibres but we can substitute some of the animal protein in processed meat. About three quarters of the meat we eat is processed.

“All these vegan burgers have a big problem: they are ultra-processed. You have to use a lot of force to blend the beans in such a way to look like meat. You have to put in a lot of stabilising factors and colourings, and so on. So from a nutrition point of view it’s not a great solution.”

Fresco also ruled out insect proteins for their unreliable production, as well as seaweed and algae products, which remain “really complicated” and grow slowly, while lab meat, at an average of £22,000 per kilo is far too costly.

“We still have a long way to go, but we are best to look at meat, fish and shellfish as part of the story,” she concluded.

In the face of polarising, and often vitriolic, debates about meat and food production, Fresco finished her speech calling for greater education from a young age, and raising visibility on food supply in order to work towards a consensus.

“We have made food so invisible that not one of us realises how blessed we are that you and I can go home tonight and be absolutely sure that there will be food for us tomorrow.

“It's only when we express that feeling of being blessed and understand those intricacies, rather than blaming farmers, that we can say this is something that we have to solve,” she concluded.