Despite progress in the supply chain, bananas remain a controversial product when it comes to workers’ rights, wages and support for small farmers. Fred Searle hears from Alistair Smith of Banana Link, a non-profit cooperative that advocates for a fair and sustainable banana trade 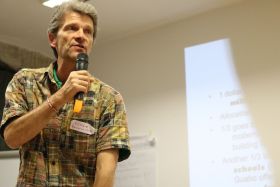