With experience at the NFU, Defra and the Food Standards Agency, Tim Bennett has taken over from longstanding ORC chair Mike Turnbull 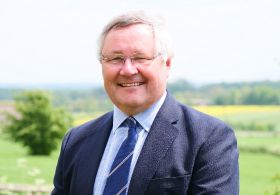 The Organic Research Centre (ORC) has announced the appointment of former NFU president Tim Bennett as the new chair of its Council of Management.

Bennett’s appointment follows the planned retirement of longstanding chair Mike Turnbull who has spent the past eight years both as a trustee and chair of ORC, the independent research centre for organic food production and land management solutions.

The former NFU president brings more than 40 years’ experience in the food and farming supply chain. As well as running an organic farm in south Wales and holding the NFU presidency, he has served as chairman of Defra’s dairy Environmental Task Force and as chair of the Food Standards Agency.

Currently, Bennett is the chair of the Centre for Innovation and Excellence in Livestock, working with twelve university partners and Innovate UK to invest in new applied livestock research capabilities around the UK.

He commented: “It was a great honour to be asked to take over the chair of the ORC. I want to thank Mike Turnbull for his incredible efforts over the last few years on behalf of ORC and particularly over the last year in delivering the farm sale that has created the opportunity to invest funds to create a more sustainable organisation.

“I am a first-generation farmer with a mainly organic grassland farm near Carmarthen in South Wales very close to the National Botanic Garden of Wales (which is also organic). We converted to organic production 13 years ago.

“The ORC is implementing a robust strategy that will make our organisation even more relevant as the UK moves to a more sustainable farming future. Our business plan recognises the value of building solid partnerships that are focussed on carrying out the right research and sharing it with the relevant audiences.

“Although the Covid-19 pandemic has caused disruption throughout the whole food supply chain, one positive outcome is that this will hopefully lead to a more evidence-based debate about the future of food production in the UK. I think that the ORC will continue to be a key contributor to this debate, as part of helping to create industry solutions that are based on sound science.”

The ORC said outgoing chair Mike Turnbull had been a “consistent and steadying figure”, seeing the organisation through a huge amount of change, most recently its appointment of Lucy MacLennan as chief executive and the organisation’s move to Trent Lodge in Cirencester.

Having served as a trustee for a succession of charities for the past 22 years, 18 as a chair, Turnbull is contemplating the future and reflecting on his input at ORC. “I am looking forward to having a rest. I am eagerly anticipating being able to spend more time with my family, particularly my grandchildren," he said.

“At the ORC, we have come through some  challenging times together, and following the recent changes, I am confident that the organisation is well placed now to make its much deserved breakthrough into the wider national consciousness as a leading player in the UK and indeed international organic scene.”