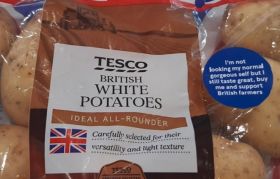 Tesco is stocking more potatoes to meet soaring demand and help growers suffering from the loss of the foodservice and chip shop market.

The supermarket chain is working with its supplier Branston to take potatoes that were previously destined for the catering trade. The so-called 'chipping varieties' may feature some visual imperfections but otherwise taste just as good.

The potatoes will be sold in the 'Perfectly Imperfect' range and carry a sticker stating ‘I’m not looking my normal gorgeous self but I still taste great, buy me and support British farmers’.

The closure of restaurants, pubs and many fast food outlets has left a major surplus of particular varieties that are made into chips, which potato growers cannot now easily sell on. Each year a third of all UK-grown potatoes are destined for the crisp industry or to be turned into chips.

Earlier this week AHDB revealed potato stocks were 20 per cent higher than at the same point last season.

However it has been a different story at retail, with Tesco reporting increased demand for potatoes since March, at an average rise of 30 per cent across UK stores.

Potato buying manager Ben Rowbotham said: “Taking these surplus potatoes not only helps meet the extra demand at the moment, but also supports growers at a time when many are facing a real struggle to keep their businesses going.

“The varieties are mainly ones used for making chips, so while they might not look as cosmetically perfect as others they will still be delicious and excellent for pan frying, sautéing, making potato wedges and other dishes.

“These potatoes will have stickers on them to show that we are committed to supporting British farmers through difficult times.”

Branston commercial director Richard Clark added: “We are working with Tesco to support our potato growers and ensure we honour our existing contracts with them.

“We now have the opportunity to get additional types of potatoes too, which would have otherwise been destined for chip shops and restaurants.”

The potatoes are arriving at Tesco stores this week.