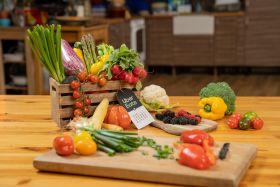 New Covent Garden Market has partnered with Uber Eats to offer a range of fresh produce boxes from wholesalers direct to consumers.

All of the produce boxes will include information outlining where the fruit and veg has come from, alongside serving suggestions to help the public gain a better understanding of their food.

The development comes in light of new research revealing that one in five Brits (21 per cent) have consumed more healthy foods during lockdown than they would have previously, with 18 per cent being more experimental and 61 per cent stating they would like to broaden their horizons by trying exotic fruit and vegetables.

The average person eats around four different varieties of fruit and vegetables a day, yet during the lockdown period, the number of veg boxes consumed across the country has more than doubled.

The range of New Covent Garden Market produce boxes will be available to order in London on 13 May for £10, via the Uber Eats app, while stocks last.

Very Radishing by Fresh Connect - A seasonal box of UK-grown produce such as asparagus from Kent, Jersey Royal potatoes and tomatoes from the Isle of Wight. Other fresh items include: beetroot, bunch radish, spring onion, heritage celery, pink grapefruit, avocado, berries and more.

Exotic fruit box by Fruit for the Office - A colourful selection of fruits from around the world, including dragonfruit, pomegranate, quince, grenadillo, paw paw, nashi pear and fresh figs.

Toussaint Wattinne, general manager of Uber Eats UK and Ireland said: “We want to do what we can to feed Brits' newfound interest in fruit and vegetables. Now everyone can order fresh and healthy produce from New Covent Garden Market to be delivered directly to their doorstep.”

Daniel Tomkinson, chief executive at Covent Garden Market Authority, added: “New Covent Garden Market’s traders provide exceptional quality fruit and vegetables, both British and from further afield, which typically gets served everywhere from high-end restaurants to schools. Since lockdown started and restaurants closed, a number of our traders have launched produce delivery boxes direct to the public and we’re thrilled to be making three of these available through Uber Eats for the first time.”