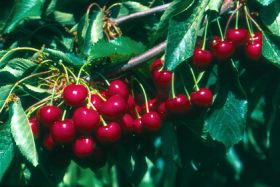 A new collaboration has been unveiled to help develop and market major new cherry varieties.

Malling Cherry Ventures is a joint venture between NIAB EMR, funding partner Berry Gardens Growers (BGG) and the Associated International Group of Nurseries (AIGN). The groups began working together nearly two years ago with the aim of developing cherry varieties of outstanding fruit quality that are adapted to intensive orchards.

Season extension, both for early and late-ripening fruit, novelty types and improved storage ability are some of the main breeding targets, the group explained, adding that the purpose of Malling Cherry Ventures is to "promote cherry selections released by the NIAB EMR breeding programme via AIGN’s worldwide network of nursery companies and commercialisation programmes."

NIAB EMR, which specialises in fruit genetics and plant breeding, has done a lot of work in the development of controlled atmosphere storage and the release of dwarfing rootstocks of apples. Known as the Malling Series, and followed by the Malling Merton series, these growth-controlling rootstocks revolutionised orchard structure in the 1980s and are now the main rootstocks used in orchards round the world.

In 2018 BGG became a member of this group together with NIAB EMR and the AIGN, led by Marzena Lipska. As the head of the cherry-breeding programme, Lipska is responsible for all decisions about crosses, selections and trials. Once a selection passes through the initial phases and small-scale trials of natural cross-breeding, the venture’s other two partners, BGG and AIGN, begin the process of commercialisation of the newly released cultivar. Commercialisation includes intellectual property protection, marketing and licensing as well as large-scale propagation of new fruit trees.

BGG financially supports the cherry-breeding programme at East Malling and promotes its selections to its growers. Outside of the UK, AIGN employs its network of member nurseries to test the selections in different cherry-growing regions around the world, and then propagate, protect and promote the selections.

The group said AIGN brings to the collaboration the benefit of its trademark database program, known as Hertha. Hertha facilitates the tracking of numbered selections in trials, maps the plantings and collects data and evaluations of the fruit. It also tracks benchmark registrations, holds contracts and manages timelines for trademark applications and deadlines.

A number of elite crosses derived from the breeding programme will be distributed among the Malling Cherry Ventures partners in the near future in order to begin evaluation of the cultivars throughout the world.