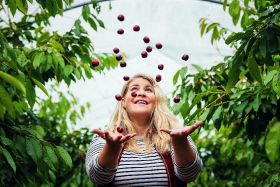 Scotty Brand has added Scottish cherries to its seasonal berries range for the first time.

The Albert Bartlett-owned brand has secured a listing with Asda, which will see 200g punnets of the fruit stocked in Asda stores across Scotland. The move comes after Scotty Brand growers enjoyed a rise in homegrown production and good growing conditions.

More than 25,000 packs of Scottish cherries have been grown for Scotty Brand by Peter Marshall & Co at West Jordanstone Farm and Muirton Farm, close to Alyth, Perthshire. The sweet juicy cherries are described as ideal for snacking and adding to desserts and cakes, and will be on sale in 56 of Asda’s Scottish stores.

The warm spring has given a significant filip to the domestic cherry season, with trade body Love Fresh Cherries reporting that the UK could expect a strong British cherry harvest, following a similarly successful crop in 2019.

The Scotty Brand Scottish cherries are grown on the Marshall’s family farm, which is run by Rowan and Jennifer Marshall and who have been growing the fruit since 2012. The farm has been in the family for four generations and the fertile lands of Perthshire combined with the long summer days in Scotland are said to be perfect for growing cherries. It also means the Scottish growing season is later than the English season and fills a gap in the cherry-growing world market.

Michael Jarvis, head of marketing at Scotty Brand, said: “Scottish cherries are renowned for being large, juicy and very tasty and we’re delighted to add them to our range for the first time and roll them out across Asda stores in Scotland.”

Rowan Marshall added: “Many people don’t think of cherries being grown in Scotland, but we started growing them in Scotland eight years ago. It’s a real rising star of Scottish fruit growing as the season is perfectly timed to complement the global market. The slightly colder climate in Scotland means Scottish cherries are ready from late July, slightly later than the English season which usually finishes in August, and before other global cherry markets start to produce in great volumes.”