Carrots are top with kids 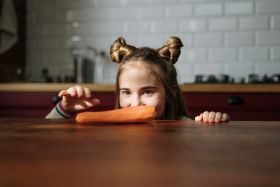 Carrots are the most popular vegetable among primary school children, according to a new survey for BNF Healthy Eating Week.

The event, organised by the British Nutrition Foundation and taking place from 28 September to 4 October, is aiming to highlight the value of including a variety of different fruits and vegetables in diets.

As part of the week, BNF surveyed 1,082 people including a range of primary and secondary school children as well as adults to find out their attitudes to a range of nutritional questions.

The survey asked primary school kids to name their three favourite vegetables. Carrots were the clear winner, with 68 per cent, followed by beetroot (36 per cent), cauliflower (32 per cent) and cucumber (31 per cent). Parsnips, swede and pak choi came in joint last, with just 0.3 per cent of kids selecting them.

Tomatoes, which were among the options, are the most frequently mentioned vegetable for adults, included by 89 per cent of respondents. Carrots, onions and peppers are the next most frequently included, mentioned by over 80 per cent of adults. Over 70 per cent of adults reported eating beans (including baked beans), broccoli, cucumber, lettuce and peas in the previous two weeks. Okra and celeriac are the least consumed vegetables in both age groups.

Mixed picture on 5 A Day

The survey sought to explore consumption of fruit and vegetables among the different age groups and found that children report eating more fruit than adults, while adults report consuming more vegetables. Some 52 per cent of primary school children surveyed and 53 per cent of secondary school students say they usually eat three or more portions of fruit each day, compared with 44 per cent of adults.

BNF science director Sara Stanner said: “BNF Healthy Eating Week aims to support children and adults to make more informed choices and to lead healthier lives by increasing knowledge of healthy eating and wellbeing, and the benefits of physical activity and cooking. 5,094 schools and nurseries, and 1,444 workplaces (or workplace teams), colleges and universities across the UK are taking part in BNF Healthy Eating Week 2020. The week’s activities include seven daily health challenges, which people are encouraged to take part in at school, in the workplace, or at home.”

The survey also examined lockdown habits and found that 50 per cent of primary school children and 26 per cent of secondary school students say that they feel better or healthier now that they are back at school, while 27 per cent of adults say they feel more healthy since lockdown restrictions were eased in July, compared with during the lockdown that started in March this year.

The survey suggests, too, that substantial numbers of people turned to unhealthy comfort foods during the lockdown.