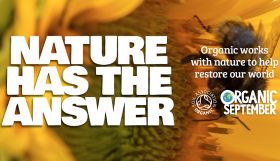 The Organic September campaign increased organic sales through supermarkets by 12.5 per cent for the four-week period, data revealed

The UK organic market has reached its highest growth level in over a decade, with buoyant growth of 9.5 per cent for the past 12 months, according to latest Nielsen data.

The figures, released during the Soil Association’s online conference this week (20 October), indicated strong growth throughout the Covid-19 crisis and that the market is now on track to reach £2.6bn by end of 2020, exceeding expectations.

Data also included sales figures for the month of September, revealing the success of the Organic September campaign which increased organic sales through supermarkets by 12.5 per cent for the four-week period, outperforming the trend in non-organic sales at that time.

Delegates at the virtual conference heard that shoppers are recognising that buying organic plays a key role in the nation’s drive towards sustainability.

Clare McDermott, business development Director, Soil Association Certification, said: “Organic has shown the vital importance of a farming system that works with nature – rather than against it – to protect and restore biodiversity, look after our soils and help to tackle the climate crisis. With consumer habits shifting and people prioritising choices that are good for the environment and biodiversity, organic stands out for its benefits of transparency and integrity. With more people than ever understanding these connections, I think the sector has a lot to feel proud of – and confident about. The time for organic is definitely now.

“It’s also great to see this year’s joined-up Organic September campaign, with it’s simple message ‘nature has the answer’, has had such a strong impact, increasing organic sales across the board, including a 12.5 per cent rise in supermarkets.”

On Tuesday, more than 300 delegates from across the organic sector tuned into a series of virtual insight sessions for Soil Association Certification’s popular annual Organic Trade Conference.

The conference, titled ‘Organic 2020: The Time is Now’, delved into key insights into current and future trends in the organic market – and highlighted the importance of organic for purpose driven businesses and brands.

Opening the conference on the first day, Helen Browning, chief executive of the Soil Association, said: “We’re in 2020 now, the beginning of what is the most important decade that humanity has ever faced. It’s time to come together to shift the way we eat, farm and care for the natural world. Organic has a key role to play, as a solution to so many of the challenges the world is facing. If we do it well, we can reverse the loss of biodiversity, feed people healthily, and reduce our impacts on the climate. That’s an extraordinary place to be in as a sector - and it’s a huge responsibility too.

“The next ten years will be crucial. A charity like the Soil Association coming together with businesses can be a real force for change. We can share and learn together. We can collaborate and make the case to governments and policy makers about the change we need to see in the world. The time for organic really is now.”

The Soil Association was founded in 1946 by farmers, scientists, doctors and nutritionists to promote the connection between the health of the soil, food, animals, people and the environment.

Soil Association Certification is a wholly owned subsidiary which certifies over 70 per cent of all organic products sold in the UK.