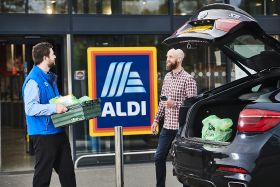 Aldi is to extend its trial of click and collect to more than 200 additional stores by Christmas, according to a company press release.

Aldi first launched its click-and-collect service to customers at a single store in the Midlands in September, before extending the trial to cover a total of 18 stores last month.

Shoppers can choose from a full range of grocery items online, then drive to their local store where their shopping is brought to their car by Aldi colleagues contact-free, in line with social distancing rules.

Giles Hurley, chief executive officer, Aldi UK and Ireland, said: “We know that more and more people want to buy high-quality food at unbeatable Aldi prices – particularly at the moment – and this trial has been hugely popular so far.

“By extending it to hundreds of new stores, we’re making Aldi accessible to thousands of shoppers who might never have visited one of our stores before.”

In September, Aldi announced it was investing £1.3 billion over the next two years, including in opening 100 new stores and upgrading a further 100 stores.

Aldi is the UK's fifth largest supermarket with 900 stores and more than 36,000 employees.