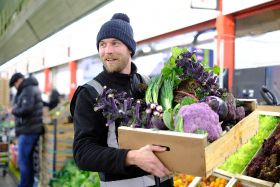 The Federation of Wholesale Distributors (FWD) has hit out at the government for failing to support food and drink wholesalers during the pandemic.

The trade body warned that the “refusal to help family-run food and drink distributors while giving huge amounts of financial and policy support to supermarkets” risks a supermarket monopoly.

This is having “devastating consequences for regional jobs, diversity of supply and consumer choice”, Bielby said.

“As the government refuses to help anyone other than supermarkets, it’s not surprising that many up and down the supply chain believe it’s a deliberate policy decision to let businesses fail, in the knowledge that the supermarkets will be there to pick up the pieces,” he added.

“The longer the Treasury ignores wholesale, the more believable this becomes. The government have one aim in food supply: to keep the supermarket shelves stocked and every policy from Covid restrictions to Brexit preparations has been introduced with this in mind. Everything else is secondary.”

The FWD also highlighted policy decisions that it said favoured supermarkets, such as giving them business rates relief, extending their opening hours, and waiving competition law to help drive sales.

Many of Britain’s leading grocery retailers have posted record sales, profits and dividends to shareholders in recent months.

FWD pointed out that over the same period the government has required food wholesalers’ restaurant and pub customers to shut, closed the schools and workplaces they supply, and left many struggling to serve their remaining customers, including care and health sector caterers.

The trade body said the decision in January to remove the provision of free school meals from small regional suppliers and relaunch the national voucher scheme in the wake of the Chartwells scandal was “a final kick to an industry already on its knees”.

“Supermarkets have long had their eye on expanding into out-of-home food and Government policy is aiding that ambition,” Bielby warned. “When the family-owned regional wholesalers have gone, the supermarkets and Amazon will be all that’s left to supply the hospitality sector as it recovers.”

Last week, food minister Victoria Prentis told the House of Commons Efra Committee she was aware that wholesalers “do not feel as if they have been included in the HM Treasury support schemes,” but added “it is probably too early to talk about financial compensation”.

A Defra spokesperson said: “We fully recognise the impact of Covid-19 on the UK wholesale industry and are committed to working closely with the sector during this difficult time.

“We are in regular contact with the wholesale industry, and we continue to take the necessary steps to ensure people and businesses across the country have the food and supplies they need.”

The spokesperson added that Defra was carrying out a number of surveys with the wholesale industry to assess its needs and “monitor the situation”.

The department pointed out that wholesalers are already eligible for some government support, although it is not specifically aimed at their sector. There are Additional Restrictions Grants, which wholesalers can apply for via their local authority, and the furlough scheme, which will remain open until the end of April 2021.

The FWD said it was continuing to meet Defra officials in a bid to secure sector-specific funding for its members in the upcoming Budget in March.