Pandemic has resulted in major changes to diet and lifestyle, with fresh produce consumption both increasing and decreasing dramatically 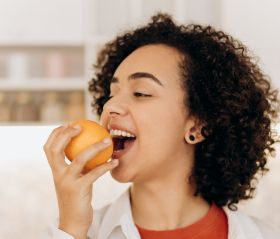 The pandemic has sparked significant changes in people’s fruit and vegetable intake on both sides of the Atlantic, a new study has revealed.

The research from King’s College London, in collaboration with American health research organisation Zoe, analysed responses to a detailed diet and lifestyle survey collected from more than one million people in the UK and US.

Responses were gathered on the Zoe Covid Symptom Study app before the pandemic in February 2020 and during it in July and September.

According to the findings, 33 per cent of participants increased their fruit and vegetable consumption (from 3.5 to 5.6 portions a day), compared to 23 per cent who decreased (from 5.6 to 3.8 portions a day).

“This increase in the number of portions [among a third of respondents] is really quite important,” said King’s co-lead researcher Dr Sarah Berry during a webinar on the research. “It’s enough in my opinion, and based on all the epidemiological evidence, to confer quite significant health benefits.”

Professor Christopher Gardner of Stanford Medical School commented that such a swing was unprecedented in the US where fruit and vegetable consumption has remained static for decades, at about half of the recommended daily intake.

He added that it would be interesting to explore whether the divergence in consumption patterns was largely driven by access to fresh produce or other factors.

More generally, the study found that two thirds of people experienced some level of diet and lifestyle disruption, with the greatest disruption seen in young females and those living in more deprived areas.

This was associated with a more variable change in weight, both weight loss and weight gain. Some 32 per cent lost an average of 4kg, while 34 per cent gained an average of 3.5kg.

These findings raise the question of whether the weight loss seen in these more vulnerable groups is always a positive thing.

The research also highlights issues around food security, with four times as many participants experiencing decreased access to food, compared to those for whom food access improved.

Echoing these findings, independent charity The Food Foundation found that 5.1 million UK adults (9.7 per cent) experienced food insecurity in the six months to August 2020, a significant rise from pre-pandemic levels.

‘A tale of two Covids’

According to the research, individual responses and changes to health behaviours varied greatly. Some 32 per cent of participants lost an average of 4kg, while 34 per cent gained an average of 3.5kg. Meanwhile, 22 per cent reported snacking less, compared to 18 per cent who increased their snacking.

“This study shows the huge individual variability in how we have changed our diet and lifestyle behaviours during the pandemic," said Berry.

"There is a perception that the disruption has had a negative impact on health behaviours and body weight, but our research shows that this is not the case for the majority of the UK and US population.

“In fact, the pandemic may have provided an impetus for many people to make changes to improve their diet and adopt a healthier lifestyle.”

Rebecca Tobi, registered associate nutritionist and programme manager at The Food Foundation echoed the fact that the pandemic has affected people in very different ways.

“While for some, Covid-19 has meant more time to cook, try new things, and exercise more, for others it has meant a loss of income, heavy childcare commitments, and real issues with being able to access and afford enough food,” she said.

“This new research really highlights the different effects the pandemic has had on us all, and how when it comes to individual experience, it’s very much been a tale of two Covids.”