61 per cent ‘no’ vote could spell end for R&D body, but result according to total levy paid shows a reverse picture, leaving Defra to decide 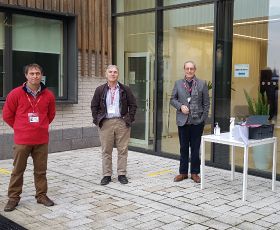 Over 60 per cent of UK horticulture growers have voted for the AHDB Horticulture levy to be scrapped in a landmark ballot on the statutory R&D organisation’s future.

This was calculated by combining the levy contributions of all the ‘yes’ voters and comparing that total with the combined payments of ‘no’ voters.

The total value contributed by growers wanting to retain the levy was £2.8m compared to the £2m put in by those who voted to get rid of it.

The ballot was conducted by election services provider UK Engage on the statutory basis of 'one levy payer, one vote'. It is now up to Defra and the devolved administrations to decide how they act on the result.

The ballot process, laid out in statute, is designed to inform ministers how the industry feels about the value of a statutory levy. They are not bound by the vote.

'A complex picture' or 'an overwhelming result'?

“It is now down to ministers to weigh up all the various factors about GB horticulture and make a decision on the future role of a horticulture levy.”

By contrast, the petitioners who led the charge for the ballot to take place, said the result and the turnout were “overwhelming” and “only confirmed” what their self-organised ballot showed last summer.

Petitioner and Spalding-based flower grower Simon Redden said he was “not surprised but annoyed” that Saphir “appears to be blatantly trying to change the rules of the ballot to suit his own interpretation on the basis of total levy paid”.

He added: “The statute is quite clear and requires the ballot to be based on ‘one business, one vote’… This is clearly a desperate and disgraceful attempt to influence ministers whilst trampling on the views of the two-thirds of levy payers who have voted to get rid of this statutory levy. It lies outside the rules of the ballot and must not be allowed to prevail.”

Commenting on the voting behaviour of growers in different levy brackets, he said: “AHDB is insinuating that the larger growers who pay the most should have more votes. We’ve spoken to a lot of large vegetable growers and they’ve had enough, they want out, so it’s not a foregone conclusion if Nicolas Saphir thinks that all the big players want to keep it.

“They don’t get value, and they’re the ones that could do their own research and keep the pertinent information to themselves to give them that competitive edge.”

A breakdown of the results shows a very mixed picture. Not only are there marked differences in how growers in different levy brackets have voted; there is also considerable variation between the voting behaviour of different crop sectors.

When it comes to the different crop sectors, only tree fruit, soft fruit and mushrooms returned  a majority ‘yes’ vote.

'Respect all sides of the debate'

Responding to the news, NFU horticulture and potatoes board chairman Ali Capper said: “This vote demonstrates that many growers feel either disappointed or disengaged with how their levy is being spent.

“It will also be a disappointing result for those that see the importance in the principle of a statutory levy and the value that applied research and development can deliver for their businesses."

She added: “This shows just how divided levy payers have become and makes it critically important that ministers consider carefully how to respect all sides of the debate.

“It is important that the business innovation that comes from research and development programmes and the business-critical work on plant protection products are not removed where there remains a need.

“While ministers are not bound by the vote, I would urge them to engage carefully with levy payers before reaching a decision on the next steps.”