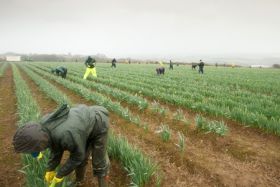 UK growers of flowers and ornamental plants have warned that millions of blooms will go unharvested this year after the multibillion-pound sector was not included in a scheme to admit overseas farm workers after Brexit, reports Tech Register.

Alex Newey, owner of Varfell Farms in Cornwall, the UK’s largest daffodil grower, told the online publication he was deciding which parts of this year’s crop to leave to rot after a recruitment shortfall. He said he currently has 400 pickers at work on the daffodil harvest, compared with his normal 750.

The vast majority of picking has for several decades been carried out by overseas workers, mostly from eastern Europe. EU citizens with settled or pre-settled status — giving them a right to stay in the UK — can work on British farms, but Newey told Tech Register there were not enough such migrants, while only food growers can use the government’s seasonal workers pilot scheme to bring in further overseas labour.

“The scheme has to be adapted to include ornamental horticulture or big swaths of ornamental farming will go to waste,” Newey told the publication.

Millions of bunches of flowers will be left unpicked at Varfell, he added, though it is too early to say exactly how many. The farm normally harvests 500m stems from its 3,500 acres each year.

UK households spent £1.9bn on cut flowers in 2017 and £7.5bn on garden goods, according to Oxford Economics, a consultancy, while further plants were exported.