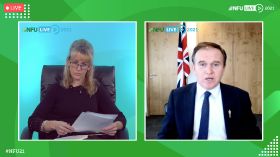 George Eustice in discussion with Minette Batters at NFU Live 2021

George Eustice has said Defra has no choice but to scrap the AHDB Horticulture levy following the recent ballot on its future but suggested an alternative model where growers subscribe for particular services.

Speaking at an online edition of the NFU Conference, the Defra secretary called the outcome of the ballot a “very straight result” despite acknowledging that some of the larger horticulture producers voted to maintain the current turnover levy.

“We will respect the outcome obviously of the ballot,” he said, but suggested the AHDB might instead switch to a voluntary levy or a subscription for particular services. This could include the work it does identifying and applying for emergency authorisations for plant protection products.

“There are things that the AHDB does that are widely valued by the horticulture sector, particularly their work on authorisations,” he said.

“We’re exploring a range of different options so we can keep those elements… but also obviously respect the result and remove the current turnover levy.”

Eustice added that Defra was also looking at whether there might be a “convening role” for the AHDB in martialling some of the new funds the government plans to launch under various R&D syndicates. These will be targeted at individual businesses and sectors.

Following Nicholas Saphir’s five-year Change Programme and Strategy, published in December, the Secretary of State said he would be working with AHDB to agree a timetable of ballots for the remaining agricultural sectors it covers: beef and lamb, dairy, cereals and oilseeds and pork. A ballot has already been triggered for potatoes and began on 17 February, running until 17 March.

“Having got that plan to reform and change the AHDB, we need to put that to all members in all sectors and we’ll be doing that in due course,” Eustice announced.

At a special meeting of the NFU horticulture and potatoes board it was agreed it is important ministers respect the result of the horticulture levy ballot, with an NFU spokesperson saying "levy payers’ views should be given full and careful consideration by ministers as they reach a decision on the future of the statutory levy".

"The NFU stands ready to assist in discussions with levy payers and Defra," the spokesperson added.

With UK seed potato exporters currently unable to access the EU market, the minister was asked when he expects a full equivalency agreement to be established allowing two-way trade to recommence.

Eustice reported “some progress”, saying the EU now recognises that the health status of seed potaoes in the UK is “probably the highest in the world, let along Europe”.

With government engagement ongoing, he said he was confident that if the matter went before the European Commission’s PAFF committee on food safety, there would be “no case whatsoever” not to grant access.

When it comes to the crucial topic of seasonal labour, Eustice said the labour providers for this year’s 30,000-strong SAWS  pilot would be announced shortly. He also reiterated his desire to broaden the scheme to cover all secors of horticulture – including flowers and ornamentals – once the pilot is eventually ended and replaced by a “fully fledged system”.

On the broad question of post-Brexit agricultural policy, Eustice discussed the three central pillars of the government’s ‘Path to Sustainable Farming’, published in November last year. These are the Sustainable Farming Incentive, Local Nature Recovery, and Landscape Recovery.

As part of the Sustainable Farming Incentive, which supports environmental approaches to farm husbandry such as IPM, the Defra secretary said the government would be opening a new round of grants “to support investment to help farmers reduce costs and improve profitability”.

“We want farmers to manage their whole business in a way that achieves profitable food production and the recovery of nature,” he said, “combining the best modern technology available today with the rediscovery of the traditional art of good farm husbandry.”

Pressed on a lack of detail on payment rates for the government’s new Environmental Land Management (ELM) scheme, he said these would be published in a few weeks’ time in a document on the Sustainable Farming Incentive.

For the initial ELM pilot rates will “probably be based largely” on existing Countryside Stewardship payment rates, but they will change in the government’s full scheme, with more generous rewards for farmers’ interventions with multiple environmental benefits.