Renowned top and soft fruit exhibition to return as physical event with new structure, new sponsors and a ‘centenary vision’ for its 88th year 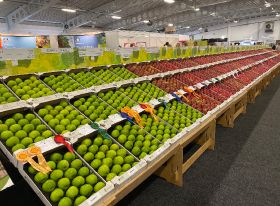 The National Fruit Show was last held in person in 2019

The National Fruit Show has unveiled plans for a new format at this year’s event, which will take place again in person after last year’s digital edition.

The Marden Fruit Show Society, which hosts the event for the British topfruit and berry sectors, confirmed the show will be held on 21 and 22 October at the Kent Event Centre in Detling, taking on board “all practical requirements” to ensure it is Covid-secure.

FPJ sponsored a special section of the show in 2020, with NFS returning the favour by speaking at FPJ Live in a dedicated segment on the British topfruit sector.

That partnership will continue as the FPJ hosts a brand new all-industry event this summer in collaboration with the National Fruit Show and key trade bodies.

In a separate collaboration, the National Fruit Show has announced Worldwide Fruit as a new sponsor for its event in October. The topfruit and avocado supplier will be one of the four show sponsors, joining NP Seymour, Isolcell/UKCA and Agrovista.

Steve Maxwell, CEO of Worldwide Fruit, said: “The National Fruit Show always does such a great job in bringing together the industry over their two days that we wanted to be a full part of the action in the years ahead.

“The pandemic has shown how essential face to face meetings, shows and exhibitions are a crucial part of the exchange of knowledge needed by our industry, so we want to help secure the future of this show which is rightly proud of its ‘by growers, for growers’ ethos’.”

New NFS exhibition manager Laura Larkin said stand bookings have been flooding in. The show usually attracts around 100 stands but this year the event expects to beat previous exhibitor numbers thanks to the expansion of an entrepreneurial area known as ‘The Hive’.

Meanwhile, new executive chair of NFS Sarah Calcutt is overseeing a long-term development strategy called ‘the centenary plan’ intended to put the show in a good position to celebrate its first 100 years in 2033.

To assist Calcutt in her new role, vice-chairs will be appointed on a voluntary basis to direct two areas of the show: Annette Bardsley from Bardsley England will oversee its education programme, while Estera Amesz from AG Recruitment will look after its commercial interests.

This remit includes talking to growers in horticultural classes not yet seen at the show including British olives, melons and grapes.

Sarah Calcutt said: “The National Fruit Show, at the heart of our industry over 87 years, was founded on a promise to showcase the best fruit. We’re still doing that nearly a century later, but the time has come to change the format of the show without losing its unique ‘feel’.

“There is so much that is positive, energetic and resilient in this industry and we have to bring its special atmosphere to a larger audience. To do that, we have to reform ourselves and tweak the show to enhance the brilliant opportunity that it is.”

A new website will help  streamline bookings and monitor competition entries, as well as acting as the ‘shop window’ for the show's charitable, education and industry-facing work. The new site is in development, with delivery expected by mid-May.

Honouring past growers and industry figures is another focus this year and going forward. James Nichols was a leading light in the development of the English top fruit industry following his time representing the industry in Brussels in the 1990s.

After the NFS AGM on 14 April, Professor Louise Manning from Royal Agricultural University gave the inaugural James Nicols Lecture. Entitled 'Leaning on the orchard gate: developing a resilient mindset', the lecture gave insights into the skills growers will need to navigate the post-Brexit, post-pandemic market with more than just financial sustainability.

In addition, Richard Hochfeld has instigated a special annual award in memory of Jon Jones for a grower delivering excellence in the fruit industry. The prize will be presented at the show dinner in October, which will follow the first day of the show.