Plentiful volumes in late June, all of July and early August will be supported by health-focused marketing campaign 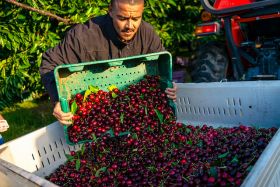 Northwest Cherry Growers’ (NWCG) first estimate of the 2021 season predicts a crop of 237,992 tonnes, which would be the third-largest in history.

BJ Thurlby, president of NWCG, said the first estimate was always has the most potential for variance from the eventual and actual size of the crop but signs suggested a longer crop, with more typical distribution between growing districts.

“It appears that at this point we are on track for a start that should begin by 1 June. In several of our earliest regions we are only a day or two behind last year, which saw harvest start on 28 May,” said Thurlby.

“As more orchards & regions come online during the first two weeks of June, volume may accumulate more slowly due to weather-impacted orchards.

“While volume may accumulate more slowly, as the end of June approaches we expect shipping volumes to exceed last year.”

Thurlby noted supplies for late June and the 4 July promotions looked promising while July should a strong month all the way through. In August, projected volume is predicted to trickle out through the end of the month.

To support this campaign NWCG has revealed it will implement the largest marketing campaign in the organization's history. The campaign will be focused on promoting the health benefits of sweet cherries.

“In North America, digital promotions remain critical to reaching the massive growth in online shoppers,” said Thurlby. “However, whether consumers are shopping in stores or online, they all seem to be putting more focus on healthier eating and so are we.”