Strawberries, early potatoes, asparagus and brassicas among the crops delayed by several weeks due to cold spring 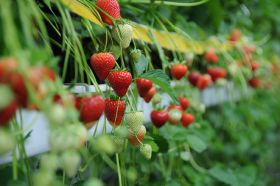 The UK is set for a glut of srawberries this summer

Retailers and wholesale markets can expect a glut of strawberries and early potatoes this summer, with the UK’s third-coldest April since records began delaying a range of crops by at least three weeks.

This was the warning from experienced New Covent Garden catering supplier Vernon Mascarenhas, who said asparagus, brassicas and some other crops are similarly late.

In Britain, April 2021 saw the lowest average minimum temperature for the month in almost 100 years, with cold weather delaying growth and frosts damaging some crops.

While retailers have been forced to import more, sourcing asparagus from Mexico, UK crop shortages have been felt less acutely in the hospitality sector – most restaurants are still yet to reopen due to lockdown restrictions.

Although al fresco dining is already allowed, many establishments are waiting until customers can be served indoors before reopening, Mascarenhas said.

He added that lots of restaurants and catering businesses have switched fresh produce suppliers during the pandemic because their normal partners were unable to stay open during the hospitality shutdown.

Businesses that have shown stability and flexibility have won new business, he said, pointing out that his employer, Nature’s Choice, now has more customers than before the pandemic.

Another big change in the sector has been to the terms of credit between restaurants and their suppliers.

“Some of the big players used to be allowed to take 120 days to pay their suppliers, but in many cases, they’re only getting seven days now,” Mascarenhas said. “I’m hoping the whole industry pulls together on this because our balance sheets have been knocked.”