Older consumers are best at using up the produce they buy and getting enough Vitamin C, according to research from fridge brand Beko 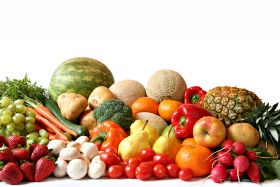 Over-65s are the most likely to eat the fruit and vegetables they buy, while only a fifth of 18-24-year-olds eat most of the fresh produce they purchase.

These were the findings of a recent survey by Turkish white goods brand Beko which surveyed 2,000 adults across the UK to assess levels of at-home fresh produce waste.

The survey also gathered data on the UK consumers' vitamin intake, and shared recommendations for the top dietary sources of Vitamins A and C.

According to the study, 69 per cent of over-65s eat most (81-100 per cent) of their shop-bought fruit and veg, with the percentage reducing incrementally as you move down the age brackets. Only 20 per cent of respondents aged 18-24 said they eat most of the fruit and vegetables they purchase.

Londoners are least likely to eat the fruit and veg they buy, the research revealed, with only 32 per cent saying they eat most of the fresh produce they purchase.

By contrast, consumers in East Anglia were the least wasteful, with 56 per cent consuming most of their shop-bought fruit and veg.

The best fresh produce sources of Vitamin A are carrots, butternut squash, sweet potato and spinach, while guavas, kiwis, bell peppers, strawberries and oranges contain the most Vitamin C.

Intake of Vitamin A was highest in London at 57 per cent, while Wales topped the table for Vitamin C at 79 per cent.

More carrots are consumed each week by over-65s than any other age group (87 per cent versus the national average of 78 per cent).

Meanwhile, 62 per cent of people in London eat oranges at least once a week (versus the national average of 53 per cent).

Beko conducted the survey to accompany its launch of is HarvestFresh fridge freezer, which it says preserves Vitamins A and C in fresh produce for an additional five days.

The fridge’s crisper drawer contains ‘three-colour technology’ that simulates the natural, 24-hour cycle of the sun. This cycle mimics natural light conditions, as if the fruit and veg were still growing in the field or orchard, helping them retain their vitamins for longer.

Lights inside the crisper drawer behave in the same way as sunlight. Each colour of light has different wavelengths and is more prominent at different times of the day.

The crisper drawer is bathed in blue light in the morning, becoming green around noon, when the sun is at its highest, and then becoming red towards dusk. The drawer remains dark throughout the night.