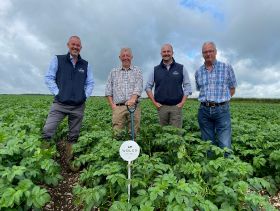 Established in 2004 by Simon Tootell and local farmer Simon Foster, Wolds Produce was set up as a potato trading business offering crops from the York area to packers. Directors Tim Foggin and Graham Bennett then joined the business in 2010.

The company has grown to become a major potato supplier into the crisping, chipping, ware and seed industries across the whole of the UK.

Over the last three years, its crisping operation has doubled in volume with its customers supplying around 80 per cent of all the crisps in the UK market to brands including Walkers, Seabrook, the Tayto Group and Yorkshire Crisps.

In 2020 it acquired 26 per cent of WM Quarrie, run by Bill Quarrie and Stuart Fox, which over the last nine years has become a successful independent seed business.

The original deal, which was negotiated by Leeds law firm Clarion’s corporate team, included a call option which Wolds Produce has now taken up with the acquisition of the remaining shareholding. This was completed on 29 June.

“At that time there was still a lot of spot-market sales, but that has shifted massively over recent years with changing weather patterns making buyers move more towards the certainty of contracts.

“We therefore looked at where we thought the industry was heading and took the decision to specialise in areas where we could see growth opportunities, namely focusing on expanding our seed and crisping markets.”

Bennett, who has been behind the growth of the seed business, added: “Following the acquisition of WM Quarrie, as well as investment in some key appointments over the last two years, in 2021 we will be supplying over 40,000 tonnes of potatoes into the crisping industry and have a seed business supplying over 15,000 tonnes, making us one of the largest independent seed suppliers in the UK.

“Andrew Johnston joined us back in September 2019, and his many years as a farm manager has already brought a new dimension to our business – his technical knowledge on growing seed is invaluable. The addition of two such well-known and experienced seed professionals as Bill Quarrie and Stuart Fox will give another welcome boost to our specialist team.”

Wolds Produce managing director Simon Tootell said: “This acquisition marks another major key step in our growth and, like many sectors, we are aware of the need to attract new talent into our industry. We are now actively looking for up-and-coming people to join both our crisping and potato seed operations as the business continues to expand and move forward.”