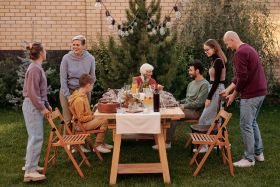 Total till sales reached -1.3 per cent versus the same period in 2020 over the last four weeks ending 17 July 2021, an improvement on -2.4 per cent in June and -2.7 per cent in the four weeks to 22 May when hospitality venues first reopened, reveals new data released today (27 July) by NielsenIQ.

The slight uptick in sales is attributed to the rising demand for fresh foods as Brits had more opportunities to socialise with friends and family and to enjoy outdoor eating and drinking.

The start of a recent heatwave, an increase in travel, summer sport and the growth in UK staycations all contributed to an uptick in supermarket sales. This is particularly prevalent in the final week ending 17 July, where sales increased by +1.5 per cent - the highest weekly growth since the week ending 12 June (+3.2 per cent), Nielsen said.

With more occasions to socialise and celebrate in groups, UK supermarkets experienced a shift in category spend, with delicatessen the fastest growing category (+9.4 per cent) over the four week period. This was driven by sales of rotisserie (+43 per cent), sandwiches (+31 per cent), freshly prepared fruit (+27 per cent), prepared pasta salads (+15 per cent) and coleslaw (+8 per cent). This was complemented by rising sales within bakery (+9.4 per cent), which was the second fastest growing category. In contrast there continues to be a move away from cupboard food with packaged grocery sales falling 9 per cent, Nielsen figures show.

NielsenIQ data also reveals that in the last four weeks ending 17 July, in-store sales declined by -1.7 per cent, this is despite a 11 per cent growth in store visits over the period. Moreover, online grocery sales fell by 3.6 per cent. However, online continues to maintain its market share of 13.4 per cent for all FMCG similar to the 13.6 per cent a year ago, suggesting that post-pandemic ‘new normal’ shopping behaviours are starting to emerge.

When compared to 2019, FMCG growths in the last four weeks are +7.6 per cent which is an indication of the underlying demand, Nielsen said.

In terms of retailer performance, the discounters Lidl (18 per cent) and Aldi (6.4 per cent) continue to lead the market in terms of growth. Marks & Spencer (6 per cent) also experienced strong performance over the last 12 weeks. Sainsbury’s (-1.1 per cent) was the best performing supermarket of the 'big 4', with market share increasing to 14 per cent.

Mike Watkins, NielsenIQ’s UK head of retailer and business insight, said: “The year-to-date growth among the Grocery Multiples is currently at 3 per cent, which shows promise for the upcoming summer period. The continued demand for staycations and hopefully good summer weather will certainly put retailers in a strong position to gain incremental sales, with fresh and chilled foods as well as drinks expected to be popular categories with shoppers.”

Watkins concludes: “However, there are two possible headwinds on the horizon. The first is that as consumer demand increases in recreation and leisure, this will dampen FMCG spend. The second, is that 4 in 10 households are now watching their spend more than they did before the pandemic, and should shoppers start to tighten wallets then retailers and brands would be under pressure to drive sales with promotions and price cuts. Looking ahead, and assuming economic activity will be close to pre Covid levels after the summer, we can then expect further normalisation of total till spend later in the year with the full year growths probably in the range of -1.5 per cent to +1.5 per cent.”