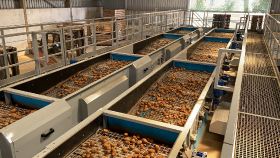 Cornish potato grower EW Button & Son has invested in a purpose-built grading facility for its early season and ware crops to keep pace with rising demand.

Following a sales spike in 2020, company owner Joe Button asked potato and vegetable machinery specialist Haith to design and install the new grading system based on a recommendation from a neighbour.

The line can handle 30 tonnes per hour and features Haith's latest innovations. Potatoes are tipped directly from the tractor-trailer into a 2.4m-wide Haith Supa-Flow Bulker which has dual direct drive, a double incline belt for easy loading, and a crop flow control unit where sensors control the speed of the bulker.

The crop passes through a Haith Evolution Multi-Separator and into a Tomra 3A Optical Sorter, which removes stones, clod and green potatoes from the dirty crop before entering a series of eight Haith Supa-Flow screen graders.

The screen graders have three full-width agitators that can run at various speeds and feature dual roller screen drives and a crop unplugging roller in a "maintenance-friendly yet robust construction".

Once size graded, the potatoes are filled into boxes via SupaFill 400 box fillers. Controlled by a touchscreen interface, these fillers are gentle on the crop and feature rubber door stop belts and multi-box height-filling functionality.

As a result of the new grading line, Button said he has seen throughput speeds increase by 35 per cent, as well as a significant improvement in crop quality, with no mechanical damage and the majority of stones and clod removed.

The Button family has been growing potatoes, blueberries and cereals at Tregawn Farm since they bought the land in 1939.