HGV tests to be fast-tracked 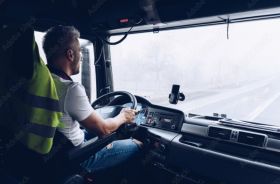 The government is expected to announce changes to the testing process for lorry drivers in a bid to tackle the labour shortage that has led to supply issues across the food industry and other sectors, according to reports.

Ministers are looking to shorten the current process to bring in new hauliers after the “penny finally dropped” that the industry shortage was getting worse not better, the BBC said.

The government said it was continuing to meet with affected groups and that any policy change would be announced in due course.

The UK has a shortfall of about 100,000 lorry drivers, in part because many EU workers returned home after Brexit and during the pandemic. HGV driver tests were also suspended for a year during lockdown, creating a backlog.

Industry sources told the BBC: “The government seem to finally understand the scale of the problem. For the first time they looked rattled.”

The proposal could include combining two tests, one for rigid lorries and another for articulated lorries, the BBC said. Prospective drivers usually have to wait between two and three weeks between the tests under current rules.

Industry figures welcomed the move but said it would not be enough to fix the problem. Paul Jackson of Chiltern Distribution joined calls for lorry drivers to be added to the Shortage Occupation List, to allow firms to bring back some of the estimated 20,000 EU drivers who have left.

“We don't put newly qualified drivers straight behind the wheel on their own. We buddy them up with experienced drivers for the first 8-10 weeks and the insurance costs for new drivers are also much higher,” he told the BBC.“We desperately need to put HGV drivers on the list of skilled workers we can bring in from abroad.”

There is an estimated shortage of 70,000-100,000 hauliers in the UK, a huge percentage of the 600,000 estimated by the Road Haulage Association to have been working in the UK before the pandemic.

A combination of Brexit, Covid and industry working conditions are said to be behind the huge gap, which is causing significant supply chain issues. Food, drink and medicine supplies are among those affected.