UK growers are flying in workers from as far away as the Caribbean, Asia and Africa to pick fruit due to post-Brexit European shortage 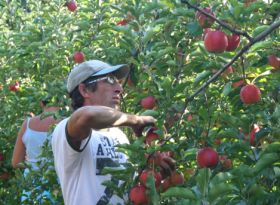 The number of fruit pickers being flown in from abroad has more than doubled this year due to a shortage of British and eastern European workers compounded by Brexit and the Covid pandemic, the UK media reports.

Home Office figures reveal more than 16,000 labourers were shipped in from across 37 countries for the 2021 season after being recruited by horticultural farmers - including from as far away as Barbados, Nepal, Tajikistan, Kenya and the Philippines.

The jump is due to an ongoing struggle to recruit enough fruit and veg pickers, farmers said, with some having to consider scaling back production as crops are left rot in fields.

One British farmer said local people simply "don't want to work in fields" while another hired 37 Brits last year and was left with just one after seven weeks, reported the Times.

They have branded the fact that they have to source workers from as away as the Philippines as 'soul-destroying' - particularly as they have to cover their air fares.

It comes after the UK introduced the seasonal workers' visa scheme in 2019, which allowed pickers to be flown in from any country around the world.

The scheme was expanded to allow for 30,000 workers this year, and before Brexit, most of them came from eastern Europe.

However many Bulgarians and Romanians have returned home following the double whammy of Brexit and the onset of the Covid pandemic.

Meanwhile many Europeans with settled or pre-settled status have now opted for less labour-intensive and better-paid jobs. It means farmers are having to go farther afield in search of workers.

According to the data, Ukraine provided the most fruit and veg pickers this year, followed by Russia, Belarus and Moldova. Rounding out the top five was Nepal, joint with Bulgaria.

Barbados has provided more than 100 pickers, with the Caribbean island's ministry of labour expecting the work to be popular with those 'who don't mind labouring in cold climes, or being away for lengthy periods, spanning six months and over.'

Farmers said they usually cover the majority of the travel costs, despite workers being flown in from central Asian countries, like Kazakhstan, Tajikistan, Uzbekistan and Kyrgyzstan - and some as far away as Kenya, Nigeria and the Philippines.

David Simmons, managing director of Riviera Produce in Connor Downs, west Cornwall, which produces cauliflowers, cabbages and broccoli for supermarkets, said most of the 300 workers recruited this season had come from Russia, Kazakhstan and Tajikistan.

He told the Times: "Over the last five years, we have been very reliant on Bulgarians and Romanians, but we have lost about half of our staff this year during the season.

"They've just decided to go back home or to Germany or other countries, or they have become delivery drivers or taken jobs which are easier than working out in the fields. We've increased wages by 12 per cent to try to get them to stay and most earn between £15 and £20 an hour. Local people don't want to start early. They don't want to work in fields.

"If the seasonal workers' pilot does not continue, the horticulture industry in the UK is finished. It's that serious."

In March last year, the environment secretary, George Eustice, launched the Pick for Britain campaign as he urged farms to 'mobilise the British workforce' to fill the gap left by EU workers.

However, the drive was seen as unsuccessful by farmers.

Some ministers hope there will be more Brits willing to take on the work once furlough ends at the end of this month and more are made redundant.

But Tom Bradshaw, of the National Farmers' Union, told the Daily Mail: "Farm businesses have done all they can to recruit staff domestically, but even increasingly competitive wages have had little impact."

According to the paper, Stephen Taylor, managing director of Winterwood Farms Ltd, in Kent, warned in July that the labour market has got 'tighter and tighter' over the last couple of years.

Taylor said: "95 per cent of all fruit and produce picked and packaged in this country is done by eastern Europeans. From the end of June, people who haven't got pre-settled status, at least, can't work. We are not talking about a few tens of thousands, we are talking hundreds of thousands of people less to work in the UK. That's a massive hole."

While the Government has appointed four recruitment companies to help find workers, their fees are being paid by the farmers.

The Department for Environment, Food and Rural Affairs said: "We continue to work closely with industry to understand labour demand and supply, including both permanent and seasonal workforce requirements, while encouraging employers to make long-term investments in the UK domestic workforce and automation technology."