With a plethora of new varieties coming on stream, the grape sector is transforming. But it’s not all about sweetness and great flavour, as Fred Searle finds out 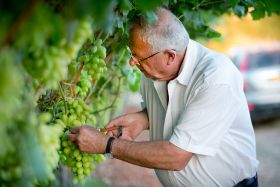 It might sound hyperbolic to some but it is no exaggeration to suggest we are witnessing a varietal revolution in table grapes. Breeders in the category have been hard at work over the past two decades and now a raft of new and impressive varieties are hitting the market, adding value to the category and transforming the way that grapes are retailed and purchased.

For many years the global grape industry had been served well by public varieties such as Thompson Seedless and Crimson Seedless, but now genetic improvements in new varieties are benefitting the whole supply chain.

Until recently, the table grapes category, like many others in fresh produce, was heavily commoditised. Grapes were simply sold as white, red or black, with no mention of variety. And although that is very much still the case in the value tier, UK supermarkets have started selling premium products by variety – for consumers looking for something different or special.

“We are seeing consumers wanting to identify with what they are eating,” says Andy Higgins of major California-based breeder International Fruit Genetics. “Lettuce isn’t just lettuce anymore; people have preferences. Whether its romaine, red leaf or butterleaf, all are important to consumers, and the same goes for table grapes.”

In the premium segment, varieties such as Cotton Candy and Sable have enjoyed considerable success at UK retailers in recent years, boasting superior sweetness, flavour and crunch. Both varieties are super sweet, but Terry Bacon of Sun World stresses that flavour is about much more than just sugar levels, identifying 10 components he says must come together “in the right way”.

These are Brix, acidity, Brix-acid ratio, juiciness, firmness, texture, aroma strength, aroma type, flesh flavour, and skin flavour. “Each flavour component is important in its own way, and one component being out of balance can compromise the entire consumer experience,” he says.

Today we are seeing widespread product and varietal differentiation in the category, with retailers using premium varieties to expand their assortment while also offering traditional varieties as value-leading lines. But one of the consequences of having all this varietal proliferation is that it can be hard for the trade to easily differentiate between the varieties.

Sometimes, this can encourage retailers to retain, or revert back to, a colour reference only, says Sun World’s Garth Swinburn. But if a variety can really stand out – not just for its superior eating characteristics, but also its high volumes and consistent quality – it can establish itself as a premium product that retailers clearly display with its variety or brand name. The result is a high price tag and a prominent position on the shelf.

Beyond flavour, supply window, yield, disease resistance, labour requirements and weather resilience are all important to a new variety’s uptake. But Neil Denny of Richard Hochfeld points out that speciality varieties are not always easy to produce and can be more susceptible to climate risk than standard cultivars. For this reason, he says, speciality varieties are often produced in smaller blocks on farms, which maintains their scarcity and “continues their niche characteristics”.

When it comes to disease resistance, Bacon stresses the importance of combatting powdery mildew, the number-one disease in grapes worldwide, accounting for over 74 per cent of growers’ pesticide costs. According to Arra varieties breeder Shachar Karniel, mildew-tolerant cultivars are set to transform the industry in terms of the impact on cost, consumer health and the environment. “Currently, fungicides are the primary means of mildew control,” he says, “but when it comes to tolerance to pesticides, the issue is more complex as it generates health and environmental concerns, aspects that are becoming increasingly important to consumers.”

As climate change intensifies, resilience to adverse weather is another important consideration. The Arra breeding programme, which is commercialised by Grapa Varieties, has a strong focus on withstanding harsh weather and is offering a number of rain-resistant cultivars. Arra Sweeties, for example, is known for its high resistance to rain, an attribute that is especially important in tropical cliamtes. Another key focus of the Arra breeding programme is to develop super-early black and red varieties, as well as adding more early white selections, explains Grapa Varieties’ commercial director Nomi Karniel-Padan.

Ultimately, the big challenge for grape breeders amid all this activity is to stand out from the crowd by developing ‘special’ varieties, both in terms of their production characteristics and consumer appeal. But with so many new varieties in circulation it can be difficult to track the production of trademarked varieties and protect breeders’ IP rights.

With this in mind, The Breeders’ Alliance was established two years ago – a coalition of the world’s four major table grape breeders, including Sun World, International Fruit Genetics and Grapa Varieties, as well as SNFL. “While acting independently as competitor businesses, the alliance members have cooperated in setting up a central database for DNA testing varieties and to coordinate market surveillance to detect and act upon sales of illegal fruit and the misuse of trademarks,” Swinburn explains.

Surveillance is now active in selected markets and, with time, will expand to cover a wider geographical area to ensure plant breeders’ rights are upheld. The other area of concern for breeders is illegal plantings at point of origin, which lead to illegal fruit sales.

“Various types of technology are being investigated to more closely monitor plantings and achieve better traceability of fruit back to a specific region and property,” says Swinburn. “One of the more important challenges the Breeders’ Alliance will have in coming years is to gain the support of the trade and retailers in assisting breeders to uphold their IP rights and avoid the erosion of value of new varieties with superior attributes.” Rafi Karniel of Grapa Varieties adds that the alliance is looking to expand to more breeders of grapes and other fruits in the coming years.