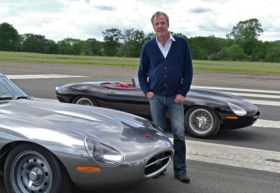 Britain has watched its self-sufficiency levels drop from 78 per cent in the mid-1980s to its current level of just 60 per cent, the report said.

Clarkson, whose TV series Clarkson’s Farm is set to return for second series, said at the Westminster event that 60 per cent self-sufficiency was "right at the bottom of the end of where you want to go".

"I think it should be much more like 80 per cent, we’re capable of it, we’ve got the right climate, we have the right soil, we could easily do it," he is reported as saying.

Minette Batters said that over the past few years not enough importance had been placed on Britain’s food production.

As an island nation which is well suited for quality food production, she said it would be a mistake to become even more reliant on the rest of the world to feed the UK.

“Delivering a comprehensive report into food security and taking appropriate action in response would show the government is serious about boosting sustainable food production in Britain," she is quoted as saying.

"This would not only help reduce the UK’s reliance on imports, which often fall below our own high standards of production, but also enable farmers to build the British brand overseas through trade."