Grant EU visas before it's too late

How bad does it need to get in Britain before the government relaxes post-Brexit immigration and plugs the worker shortage? 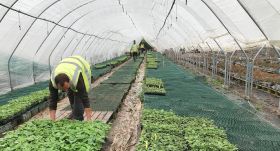 Something is rotten in the state of England. And it’s not just the unpicked fruit and veg left to decay due to an acute labour crisis.

Whether Prime Minister Boris Johnson detected the distinct whiff of hypocrisy as he stood at the UN Assembly on Wednesday (22 September) to tell the world it must “grow up” and act to curb climate change, while – thanks to his government’s inertia – growers back home abandoned crops thus increasing UK dependence on food imports, is debatable. But one thing is certain, Westminster – as Nationwide Produce’s Tim O’Malley puts it – could solve the problem “with the stroke of a pen”.

British producers are by no means the only UK sector suffering from an acute worker shortage gripping the country this year. For the three months to the end of July 2021, the number of people on payroll was almost back to pre-pandemic levels, meanwhile the country registered over a million job vacancies. Yet, well over half of these unfilled posts, according to an August report commissioned by the NFU, are in farming, food production and distribution, as well as retail and hospitality.

Central to the issue is that many Europeans went home after Brexit, and although the government introduced a pilot seasonal worker scheme to provide labour, it has not been sufficient. At the same time, British nationals are unwilling to take up the slack.

Nevertheless, at the time of writing, Westminster continues to ignore countless industry pleas for food sector workers to be added to its skills shortage occupation list and refuses to introduce a proposed 12-month ‘Covid-19 Recovery’ visa – both of which would enable EU citizens to work in the UK and plug vital gaps in the supply chain.

In September, as harvests ramped up, the growing clamour from UK producers for the government to act was eclipsed overnight by a shortage of CO2, bringing fresh chaos to the beleaguered food industry and diverting government attention towards resolving that crisis.

“Everyone is struggling,” says British Growers Association CEO Jack Ward, speaking to FPJ as the dire ramifications of the co2 shortage unfolded, “meat processors, retailers, logistics providers, everyone. We realise we are not as badly affected as some others. But what we want to know is, has the government got a plan? Is this [labour] situation under control? Because it doesn’t look like it.”

Meanwhile, an up to 35 per cent farmworker shortfall and deficit of some 100,000 lorry drivers continues to force UK growers to abandon crops, incur huge losses and scale back production.

East of Scotland Growers, one of the UK’s leading brassica producers, went on record in early September to say that, so far this season, it had left 5.5m heads of broccoli and 1.5m cauliflowers rotting in fields due to the lack of labour and lorries, with the busiest six weeks of the season still to come.

At the same time, persistent government silence over whether its seasonal worker pilot (introduced days before the January 2021 Brexit deadline) will be repeated means growers still have no idea whether they will have any overseas labour provision at all in 2022, forcing many to plan smaller harvests next year or consider closure. The inevitable produce shortfall will be made up by imports.

“Losing access to workers [post-Brexit] has been catastrophic for the industry,” Ali Capper, chair of British Apples & Pears and owner topfruit producer Stocks Farm tells FPJ. “The implementation of the government’s seasonal workers pilot scheme that brought 30,000 permitted workers into the UK was great, but it’s simply not enough. It must be made permanent, it must be expanded [to allow in more permitted workers], the number of permit operators must be expanded, and it must include the ornamental and flower sectors. Until then, our sector is a very difficult place and we will see growers leaving the sector.”

One Cornish brassica grower went as far as telling The Times that if the seasonal workers pilot doesn’t continue, “the horticulture industry in the UK is finished. It’s that serious”.

Why, then, doesn’t this self-proclaimed ‘green’ government (remember its 10-point plan?) just ‘get this done’? Brexit dogma, it seems, and the fear of going against its anti-immigration ‘vote-leave’, ‘take back control’ pledges, stand in the way.

But, says Capper, UK growers aren’t asking for something new. “We have had a seasonal worker scheme in this country for decades. As do other developed agricultural nations. The idea that for some ideological reason we can’t have it anymore is crazy.”

As yet, the government has offered growers no alternative plan for tackling the current or future post-Brexit labour shortfall, adds Ward, other than repeating its mantra that ‘there are plenty of UK workers’.

“’It’s alright’, the government keeps saying to us, ‘you’ve got it all wrong.’ Until it isn’t, and they realise at the last minute they need to do something,” he tells FPJ. “We’ve seen this with the hauliers. We saw it with the seasonal pilot programme, announced just weeks before the 2021 Brexit deadline, and the new operators announced in April 2021, weeks before UK harvests began. Everything is implemented so late. Why, why, why? This is not government, this is presiding over chaos.”

In spite of considerable wage increases (on some farms, pickers and packers can reportedly earn up as much as £15-20 an hour) and other worker incentives, the British populous remains unwilling to take on horticultural work. At Stocks Farm in Herefordshire, Capper this season advertised locally for 73 pickers, had nine applications and only one appointment. “In terms of recruiting locally, we failed completely,” she says.

In a recent open letter to the government, NFU vice president Tom Bradshaw told Downing Street that British farm businesses have done all they can to recruit staff domestically.“But even increasingly competitive wages have had little impact because the labour pool is so limited – instead only adding to growing production costs," he said.

“It is simplistic to argue that the end of furlough will see many more people meeting this shortfall, because furloughed workers are concentrated in urban areas and not where many agri-food roles are located.

“A short term Covid Recovery Visa, alongside a permanent Seasonal Workers Scheme, would be an effective and, frankly, vital route to help the pressing needs of the industry today.”

Asked whether she is more optimistic about the labour situation next year, Capper is categorical. “No,” she says, speaking in late September from her Herefordshire orchards as Boris Johnson lectured world leaders in New York.

“I am not more optimistic about next year, unless the government acts. There is nothing positive about this story anymore. We have been lobbying the government since the referendum in 2016 about the need for access to workers. And we’re still doing it now.”