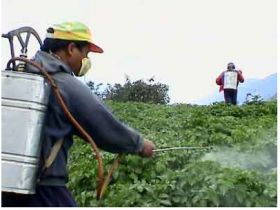 According to one study published last year in the journal BMC Public Health, 385 million farmers and farm workers worldwide are estimated to be unintentionally poisoned by pesticides each year, with an estimated 11,000 fatalities.

The greatest number of cases is thought to be in southern Asia, followed by south-eastern Asia and east Africa, with regards to non-fatal UAAP (unintentional, acute pesticide poisoning).

Project coordinator Alessandro Giusti said: “With thousands of deaths worldwide, we are in urgent need of a rapid new monitoring device that is accurate, highly sensitive, and cheap to produce."

The Graced team also sees the applications being useful in so-called ‘next-generation’ food production systems. "Vertical or urban farms are like a bit like a laboratory where everything is conducted in controlled rooms,” said Giusti. “Controlling the water quality is very important to the success of these types of farms, and if this process is automated, it is even better.