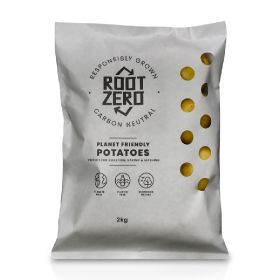 Puffin Produce has launched what it claims are the UK's first carbon-neutral potatoes.

Root Zero planet-friendly potatoes are grown in Pembrokeshire and have been launched into 200 Co-op stores across the UK. Further supermarket availability is expected to be announced in the coming months.

The company explained that it has measured every contribution to the potatoes’ carbon footprint, from the power used on the farm to the transport used to take Root Zero potatoes to the supermarket, and even down to customers cooking their spuds at home.

Going further, the supplier has also committed through the Science Based Target Initiative to a company-wide 1.5°C target to reduce its operational emissions by 46 per cent by 2030.

While it works towards that reduction goal, Puffin is investing in carbon-offset projects that it said will neutralise all currently unavoidable carbon emissions. The offset projects supported include reduction schemes which cut emissions as well as removal projects which absorb greenhouse gases.

The planet-friendly potatoes are packed in 100 per cent plastic-free paper bags which, the company has calculated, will prevent more than five and a half tonnes of plastic arriving on supermarket shelves.

Innovations in water-based inks and a special adhesive technology makes the paper bag completely recyclable: it can be reprocessed back into high-quality paper again and again. It’s also reusable for storing other vegetables and completely home compostable.

Root Zero points out that it is on a mission to raise awareness of the link between food waste and climate change, and the packaging has handy tips for cooking the spuds with the skins on and other ways to reduce food waste when the potatoes reach customers’ kitchens.

Huw Thomas, chief executive of Puffin Produce, said: “The food system contributes up to 30 per cent of global greenhouse gas emissions, which are causing the planet to heat up faster than ever before. We have to act now, so we’re on a mission to become carbon neutral and farm in a way that protects and regenerates our land, plants and wildlife.

“This isn’t easy. We’ve engaged the best scientific advice and partnered with organisations who are helping us to measure, reduce and certify our impact. And we’re also sharing what we learn along the way - with farmers, producers, retailers and customers - so that we can all have a more positive impact on the planet.

“We are hoping that Root Zero will be the first of many carbon-neutral, responsibly grown, sustainably packaged products that will start to tackle the huge impact of the food industry on climate change."

Root Zero is minimising greenhouse gas emissions from its whole production process by breaking down its overall footprint to look for improvements in farming, production and transport practices.

These include growing new varieties of potato which do not require storage at low temperatures, using more fuel-efficient tractors and electric cars and moving towards 100 per cent green electricity use from 2023.

Root Zero will also be generating its own green energy by installing solar panels at its production site and wind turbines on its farms.

The brand said its commitment to responsible farming practices will also remove carbon from the atmosphere, regenerate soil and increase biodiversity through initiatives such as planting healthy, mixed rotations of cover crops which sequester carbon and the use of abated fertilisers which reduce nitrous oxide emissions.

The company is creating a new Root Zero biodiversity woodland and has invested in a nearby undersea restoration project to plant new seagrass meadows. On its farmland, 445 acres of new cover crops are being planted which, as well as sequestering an estimated 97,900kg of carbon dioxide, will also boost soil health and provide additional habitats.

To further support biodiversity, around 110 miles of hedgerows will be conserved and specific projects are underway to protect the area’s barn owls, yellow hammers and rare solitary bees.