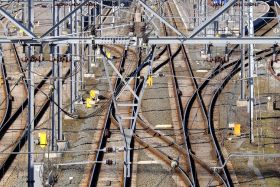 UK supermarket Tesco is to increase its use of trains to distribute products by almost 40 per cent as its boss credited investment in rail freight for helping to keep its shelves stocked during the lorry driver crisis, reports The Guardian.

Ken Murphy, the chief executive, said the retailer had continued to cut prices despite commodity price increases and rising delivery costs but admitted it had reduced the level of discount promotions as well as the choice of products, such as pasta, in order to ensure it was fully stocked.

Murphy said the supermarket aimed to deliver 90,000 40ft containers of goods a year to its warehouses via trains by the end of 2021, up from about 65,000 at present. The tactic comes amid a battle for lorry drivers that led Tesco to offer new sign-ups a £1,000 incentive this summer.

Tesco’s rail service already includes five trains a week that bring fresh produce to the UK from Spain. From next month, Tesco will add two new UK food transport train services, including one that will link Spain with Scotland, the report said.

Murphy said Tesco was one of only three retailers that used a significant amount of rail freight. “This is a fantastic story from a sustainability point of view but it has really come into its own helping our supply chain resilience,” he said.

The UK’s biggest supermarket doubled profits in the first half of the year as it reduced costs related to the coronavirus pandemic and said its strong supply chain had meant it experienced fewer shortages than rivals despite the industry’s widespread delivery problems.