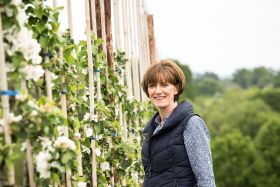 The NFU is seeking government action to double its Seasonal Workers Pilot (SWP) scheme for UK horticulture next year, as worker shortages continue to hit fruit and vegetable farms.

Speaking at an NFU Council meeting in Warwickshire on Tuesday (12 October), Ali Capper, NFU Horticulture and Potatoes Board chairwoman, said the government must expand the scheme from 30,000 visas this year to 60,000 to avoid a labour crisis on farms in 2022.

“In July, our peak month, we were 34 per cent short of seasonal workers. That’s the highest it has ever been. It’s a proper crisis,” Capper said.

The scheme was only recruiting 30,000 workers - to be shared among other sectors - against a horticulture industry that needs 80,000, she noted.

Capper, who grows fruit and hops on the Worcestershire/Herefordshire border, said she advertised for 70 workers through her local job centre – nine responded to the advert and only one person was still looking for a job when they got to interview stage. A week later, that person had found another job.

She said she has never known anxiety levels in the horticulture sector to be so high. “How can we plan our businesses for next year if we don’t know whether the scheme is permanent?” she asked.

“We don’t know whether the scheme will even be here in 2022. We don’t know what the numbers are. Pilot operators cannot even start recruitment for next year.”

Capper urged the government to also extend its 12-month Covid recovery visa scheme to cover horticulture to help the sector “get back on its feet”.

“We need more visas, more operators and we must have plants and flowers included in these schemes,” she added.

The horticulture sector is facing “unprecedented costs and inflation”, she explained, including energy price rises and a 10-15 per cent and 40 per cent increase in the cost of packaging and cardboard respectively.

Meanwhile, some UK glasshouse growers in the Lea Valley have stopped production because they cannot afford the costs or find the labour to keep them going.

"Around 30 per cent of members have indicated that they will not be planting cucumbers in January due to the uncertainty surrounding the availability of workers and the high gas price," Lea Valley Growers Association secretary Lee Stiles told FPJ.

"British food producers have gone from essential working heroes to expendable zeros in 18 months," he said.

NFU vice-president Tom Bradshaw said the government’s narrative of a “low skill, low wages” sector was completely unfair for those highly skilled workers working in the field. Average pay in the horticulture sector is £10.22/hour, but most growers are now paying £12-£18/hour.

But Farmers Weekly reported that the Home Office has played down the chances of a rethink.

A government spokesperson said: “We understand the importance of seasonal labour in supporting a successful and effective agricultural and food sector.

“This year we expanded the agricultural Seasonal Workers Pilot to 30,000 visas for workers from across the globe to come to the UK for up to six months.

“However, the pilot is not designed to offset the sector continually. We encourage the sector to make employment more attractive to UK domestic workers through offering training, careers options and wage increases, and to utilise the Find A Job website, where businesses can upload and manage their vacancies.”