Yes Peas! celebrates success of 'Adopt a Pea Field' campaign which raised enough funds to provide over 2,000 meals for FareShare 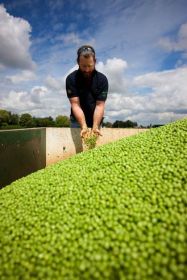 UK-wide industry campaign Yes Peas!, led by the UK’s Vining Pea industry, is celebrating after its annual campaign to mark the pea harvest raised enough funds to provide the equivalent of over 2,000 meals for the UK’s biggest charity fighting hunger and food waste, FareShare.

The campaign’s ‘Adopt a Pea Field’ initiative launched in July 2021 during Great British Pea Week and invited UK residents the chance to ‘adopt’ a UK pea field for a nominal charitable donation of £1 – or indeed, 100 p(ea).

Britain’s pea fields were allocated on a first-come, first-served basis with only a limited number of fields up for adoption, of which all were successfully ‘adopted’ in just 5 days. Thanks to generous donations from pea lovers across the country, the initiative raised £550 which will provide the equivalent of over 2,000 meals for those in need.

Shula Granville, Commercial Manager at FareShare said: “We were delighted to partner with Yes Peas! earlier this year to raise awareness of Great British Pea Week and are absolutely thrilled with the results from the adoption initiative. Every donation helps us tackle hunger in the UK, and this innovative initiative from Yes Peas! Has helped FareShare support the most vulnerable people in our communities.”

Coral Russell, Crop Associations Executive at the British Growers Association, which runs the Yes Peas! campaign, says: “We were overwhelmed with adoption requests during Great British Pea week and very thankful for all the incredibly generous donations from the Great British public.

“Being able to do our bit in providing funds to FareShare was very uplifting, particularly as fighting hunger and reducing food waste is a huge priority here in the UK.

“Here in Britain, we’re 90% self-sufficient in pea production so the industry plays a huge part in our agricultural heritage. We celebrate Great British Pea Week each year as a mark of the hard work and determination of Britain’s pea vining industry which sweeps the length of the Eastern Seaboard.”