Dale Pinnock has teamed up with the UK and Ireland Mushroom Producers to champion vit-D enriched mushrooms, group says 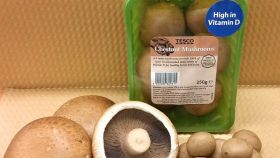 Dale Pinnock, otherwise known as  The Medicinal Chef, is encouraging British consumers to eat more mushrooms as a way of bolstering their immune systems during the darker, winter months.

Grower group the UK and Ireland Mushroom Producers said the nutritionist and author will champion vitamin-rich fungi and promote ways of including mushrooms in consumer diets to help people stay healthy, especially as daylight hours diminish.

Quoted in a press release from the grower group, Pinnock said: “Mushrooms are an excellent source of vitamin D and other essential vitamins, including vitamins B6 and B12.

“They are an extremely versatile vegetable which can be used in an array of winter-warming dishes, coming in all shapes, sizes and colours. The staple veg is frequently used as an easy swap for meat, due to its meat-like texture and umami flavour, ideal for those following a flexitarian or plant-based diet.”

A recent survey of 2,000 Brits commissioned by the group revealed that 44 per cent of respondents do not get enough sunlight, exposure to which generates vitamin D production in the human body.

The 18–24-year-old age group struggles the most, it found, with over 50 per cent stating they are ‘too busy’ during the day to go outside.

With daylight hours dwindling during the cold, winter months, more Brits are at risk of facing a vitamin D dip, the group said.

“More than ever before, the nation will be actively seeking out recipes that have additional health benefits including the all-important vitamins in their diet,”  the UK and Ireland Mushroom Producers said.

“As 36 per cent say they plan to eat healthier this winter than in previous years, the popularity of the humble fungi will continue to rise, being a staple ingredient used in a range of hearty winter dishes.”