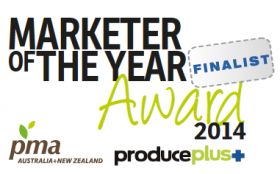 PMA Australia-New Zealand and Produce Plus Magazine have announced the five finalists for the PMA-Produce Plus Marketer of the Year Award 2014, now in its third year as the premier award for marketing in the Australasian fresh produce and floral industries.

From an exceptionally strong field, the five finalists are:

–  Ginny Masfen and the marketing team at Turners & Growers for the Jazz Apple ‘Big Crunch’ campaign.

– Stephen Twinn on behalf of the Vital Vegetables Marketing Partners team for their launch of the ‘Vital Vegetables’ range of fresh pre-packed slaw and salad lines in New Zealand.

–  Paul Graham and his marketing team at Potato Marketing Corporation Western Australia for their ‘Fresh Potatoes – Serve up Some Goodness’ campaign.

– Andrew Francey and the marketing team at OneHarvest for the launch of ‘Love Beets’, a range of vacuum-packed, natural baby beetroot.

The Marketer of the Year Award, which recognises outstanding achievement over the past year in the marketing of fresh fruit, vegetables and flowers in Australia and/or New Zealand, attracted a highly impressive list of entries from all points of the value chain, according to a media release from PMA A-NZ and Produce Plus.

“Once again, we have been very impressed by the strength and scope of the entries we’ve received for this Award,” said Produce Plus Magazine’s managing editor John Hey. “We were presented with even more examples of excellent fresh produce marketing than previous years, which only made it more difficult to narrow it down to five finalists.”

CEO of PMA Australia-New Zealand Michael Worthington said that innovation was a feature of this year’s entries.

“When you look at the strong line-up of entries, you realise how innovative companies in Australia and New Zealand are being with their marketing campaigns,” said Worthington. “Whether it’s incorporating the new social media tools now available to all of us, collaborating with product suppliers from the fast-moving-consumer-goods sector or introducing characters that ‘connect’ with consumers of different age groups, companies are using innovation as their point of difference.”

The winner of the PMA-Produce Plus Marketer of the Year Award 2014 will be announced during the gala dinner at the PMA Fresh Connections conference and trade show on 25 June 2014 at Eden Park, Auckland.