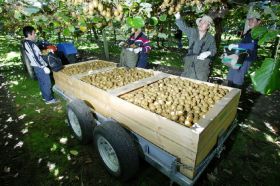 New Zealand's Seeka Kiwifruit Industries has reported growth in profit for the opening six months of the year, despite a number of obstacles that had the potential to upset operations.

Profit before tax soared by 115 per cent to NZ$5.36m, reflecting record kiwifruit volumes handled by post-harvest along with good earnings achieved by the orchard division.

This came despite a fire that significantly damaged Seeka’s Oakside postharvest facility just prior to harvest, before the group then had to focus on managing a record 27.7m trays of kiwifruit – the first major uplift in production since 2011's previous record of 27.1m trays.

Hayward volumes handled by postharvest increased by 3.9m trays while market share remained steady at 24.8 per cent. Zespri SunGold volumes rose by 2.8m trays, and further growth is anticipated as orchards continue their recovery from the Psa-V outbreak.

Other news during the quarter included the purchase of the kiwifruit and other orchard operations and assets of Australian produce company, Bunbartha Fruit Packers and associated entities for A$22m.