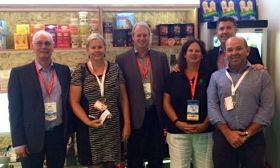 The trade mission to the UAE offered nine companies the chance to meet with importers and retailers and gain a greater understanding of market requirements and opportunities that exist in the Middle East for Australian produce.

As well as attending Gulfood, which saw more than 5,000 business represented at the industry event, the companies also toured major retail stores in Dubai, including Lulu’s Hypermarket, Spiney’s Dubai, T.Choithran & Sons, and the Carrefour Mall of the Emirates among others. The delegates also visited the central fresh markets in Dubai.

“Demand is growing for Australian produce and consumers are willing to pay extra for the quality, and love Australia’s ‘clean and green’ reputation,” Heaven said. “We’re definitely looking at the higher-end retailers and the strong expat community in Dubai that is seeking Australian produce.”

Taking part in the trade mission were a mix of companies already exporting to the region, as well as companies exploring new export opportunities, and included representatives from Traprock Orchard, SunnySpot Avocados, Food Leaders Australia, Stahmann Farms, Pilton Valley Produce and Story Fresh from Toowoomba, Moonrocks from St George, and Harrowsmiths for its Queen Garnet plum, and Warwick’s Grove Juice.

Australia’s horticulture exports to UAE have continued to grow in recent years, with the value of Australia vegetable exports to the Middle East increasing 24 per cent from 2013/14 to more than A$270m in 2014/15, according to data from the Global Trade Atlas.

DAF has announced its third and final round of funding for companies in the Queensland Murray Darling Basin region looking to diversify into horticulture.

The department is investing A$500,000, with companies able to apply for up to A$100,000 per project that will develop horticulture in the region.