Fungus sports drinks could be on the way 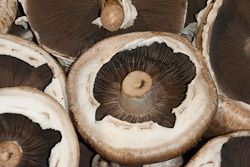 Researchers from the University of Sydney in Australia are hoping to turn mushroom waste into nutritious sports drinks.

Given its rich nutritional profile and the large volume of waste produced by the mushroom industry, the bioengineering researchers are working on a sustainable, healthy drink to help people refuel after workouts.

The project is part of the university’s Australian Research Council Training Centre for the Australian Food Processing Industry in the 21st Century, which is focused on producing nutraceuticals to boost Australia’s competitiveness in the global market.

Fariba Dehghani, director of the centre, explained that while sports drinks were originally invested to replenish electrolytes and carbohydrates after exercise, these days they were treated by consumer as normal beverages.

“The problem is,” Dehghani continued, “the average person is nowhere near active enough to require these energy-giving cocktails of sodium, sugar and caffeine. Even professional athletes are encouraged to drink two bottles of water for every bottle of sports drink they consume.”

The researchers will be developing a low-carbohydrate low-fat drink, that’s high in electrolytes, amino acids, fibre and vitamins. Mushrooms have the added bonus of being they only non-animal source of vitamin D, with a balance of potassium, phosphorus and magnesium, with low sodium content.

“Mushrooms are the perfect ingredient to create a new sports drink,” added Peter Valtchev from the University of Sydney’s School of Chemical and Biomolecular Engineering. “Such a drink would hydrate and energise the body without the negative effects of sugar, sodium and caffeine.”

While global demand for mushrooms has increased from US$29.4bn in 2013 to US$50bn in 2019, according to the university, wastage is still high with about 80 per cent of mushrooms being rejected due to overgrowth of deformities.