Next gen of ripeners takes off in Aus 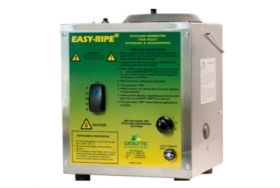 Since US-headquartered Catalytic Generators launched its line of products in Australia, demand has only continued to grow.

That’s according to Leigh Cummins, who saw an opportunity to bring Catalyic Generators’ range of ethylene generators and Ethy-Gen II ripening concentrates into Australia in 2015, offering a safe, easy and efficient on-site production of ethylene for fruit ripening rooms.

Cummins says it has been a welcome alternative from ripening centres in Australia that use pressurised ethylene gas – a potentially explosive and more expensive way to ripen fruit.

Cummins says he saw a gap in the market when Australians began taking ripening courses overseas and learning about the Ethy-Gen ripening system, which has been the ripening system of choice in the US and Europe.

“It took some time to be able to set up the Catalytic Generator here in Australia to show people the way it was done,” he says. “Now, we’re working with around 56 companies including Coles, MacKay’s Marketing, VB Sculli, Perfection Fresh and Freshmax.”

Ethylene is primarily used to ripen bananas and add colour to tomatoes, though Cummins says there’s been uptake in ripening mangoes, papayas and de-greening citrus.

“In the past 12 months we’ve had about a 70 per cent increase in business compared to the year before,” Cummins says. “And as pressurised ethylene suppliers are now requiring ethylene sensors, which our products don’t require, we’re seeing more people coming to us as an alternative – it saves them having to invest in ethylene sensors.”

This article was originally published in the spring edition of Produce Plus, out now.