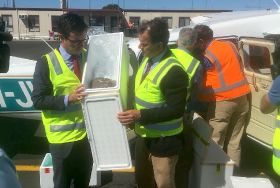 Sterile fruit fly bred with “attractive” traits have been released in South Australia by air today.

The programme, called SITplus, is a bid to reduce numbers of active fruit fly in the state and assist incursion eradication. The flies have been bred specifically at the new National Sterile Insect Technology (SIT) Facility in Port Augusta, South Australia.

“Our SITplus programme includes work to develop the most attractive fruit fly for native flies. These sterile fruit flies, 50 per cent male and 50 per cent female, have been raised to be more attractive to the wild population,” said Australia’s minister for Agriculture and Water Resources, David Littleproud.

“Among the other SITplus developments is a gel diet to help raise more sterile flies more consistently, work to build up male-only offspring, and piloting the National Sterile Insect Facility in Port Augusta, which will produce up to 50 million sterile male Qfly each week when fully operational,” he said.

The sterile launch today follows an initial successful trial that took place in March. The flies are being released aerially and took off from Adelaide Airport this morning.

The SITplus programme was coordinated in partnership with the SIT facility and grower-owned research and development corporation, Hort Innovation.

“Late last year we saw the creation of the nation’s state-of-the-art production facility, and now to be releasing the first ‘super’ flies from the factory today to respond to an incursion for the first time is a big achievement,” said Hort Innovation chief executive, John Lloyd.

The flies were produced in a special breeding programme which created flies with traits that were most attractive to wild fruit fly, to encourage procreation. The sterile flies halt reproduction and are hoped to reduce population numbers.

Similar programmes have been effectively executed in California and Guatemala.