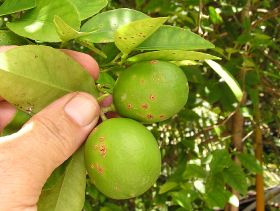 Following the detection of citrus canker in a Northern Territory, and subsequently six locations across the state, plants affected by the disease have now been confirmed in Kununurra and Wydnham in Western Australia.

The six Northern Territory detections included one commercial production nursery, and two retail outlets. All of these locations have had citrus materials destroyed.

The other three locations were backyard growers who contacted authorities.

“The fear is, that if we have a perception that we don't have the disease [in the NT] under control, contained and eradicated, that there might be some perceived market risk from our trading partners that our biosecurity issue becomes their biosecurity issue, even though the fruit doesn't transmit the disease,” said Cant.

Citrus Australia CEO, Nathan Hancock said in a statement on the industry body's website that they were commited to maintaining Australia's favourable pest and disease status, which includes internationally recognised freedom from citrus canker.

The statement also said that "while there are no international trade implications at this time, some jurisdictions have introduced domestic movement controls to prevent entry of citrus canker hosts and carriers from the Northern Territory."

It added that "the NT is not a significant commercial producer of citrus and in 2018 the Department of Agriculture and Water Resources has not issued certification for the export of any citrus material from Darwin."

Northern Territory Chief Plant Health Officer, Sarah Corcoran, said the outbreak is very low level. While implications may not yet be severe for commercial growers, backyard domestic suppliers and small-scale hobby farmers could be affected.