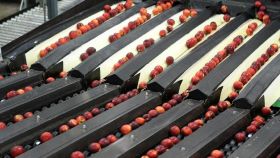 In a bid to improve performance and efficiency, post-harvest solutions company Tomra has partnered with UK-headquartered engineering and industrial software specialist, Aveva.

The first Compac product resulting from this partnership is Smartline, which is built on Aveva’s Wonderware software. Smartline features an operational dashboard for visualisation of line performance and an intuitive user interface designed to facilitate line control in packhouses of all sizes

Aveva said in a statement that the move will create greater operator performance, visibility and efficiency with Tomra and Compac equipment.

Tomra were equally as pleased with the partnership, announced officially on 18 October.

“Compac, now part of Tomra, has decades of global packhouse operational experience which is now being applied to the Aveva platform.”

Large-scale US citrus packer, Fowler Packing’s vice president Sam Parnagian said he welcomes the partnership into his operations. “Continued success for our company will be influenced by effective use of the latest technology to improve automation, control, and decision-making,” said Parnagian.

“It’s a key focus area for us and we’ve seen significant performance and efficiency improvements from recent automation projects.”