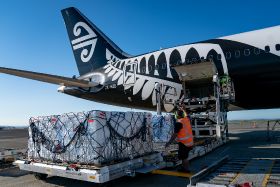 A shipment of some 550 cartons of Jazz-branded apples from New Zealand’s Hawke’s Bay growing region have set sail for Japan ahead of the country’s Golden Week festivities from 29 April to 6 May.

The nation’s annual springtime holiday, Golden Week is a time for celebration and often features the arrival of new season fruit.

T&G said the fruit will be kept at zero degrees in the cargo hold of an Air New Zealand Boeing-797-9 Dreamliner which departed Auckland this morning, 18 April. Around 10 tonnes will arrive at Tokyo’s Narita Airport.

“Japanese apple lovers have really embraced Jazz apples since they were introduced to consumers in 2011 and we’re looking forward to sharing this special fruit with Jazz fans and introducing it to new consumers this year,” said Sarah McCormack, T&G Global’s director of the apple category.

McCormack said T&G Global expects more than 150,000, cartons of Jazz apples to be exported this season, mostly via seafreight and some, like the aforementioned order, by air.

The Jazz apple enjoys added popularity in Japan, with an official Jazz Apple Anniversary Day celebrated each year on 28 June – the date the apples’ first shipment from New Zealand landed in the country.