Banana the fruit of choice, as fresh fruit imports into Japan increase by 3 per cent year on year 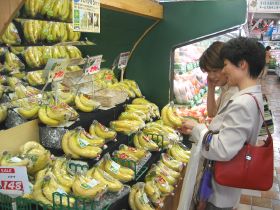 The 2019 figure marks the highest import volume recorded in the past seven years (2013-2019), with bananas making up a significant proportion of all imports, totalling 1.04m tonnes, according to Tokyo Seika president, Jack Moriya.

The Philippines remains the biggest supplier of bananas to Japan, with 80.1 per cent of all imports coming from the South-East Asian country. The strength in numbers is proof that production has returned to normal levels following Typhoon Pablo, which hit in 2012.

Ecuador, Mexico and Guatemala have all shown an increase in volume of bananas shipped to Japan. The zero-tariff agreement between Japan and Mexico encouraged a 94 per cent increase on total imports year on year, and the country now supplies 5.2 per cent of all banana imports.

Aside from banana imports, oranges, avocados and lemons were fruits characterised as ‘increasing items’, with avocado imports up 4 per cent from 2018 to 77,287 tonnes.

Mexico was the main source of avocados, suppling 91.6 per cent, while the emerging status of Peru saw its market share drop 13 per cent. Colombia shipped its first consignment of avocados to Japan in December following the removal on a trade ban in July 2019.

These three countries are expected to compete for market share in Japan in years to come, with Moriya predicting the possibility of an oversupply situation.

There is some concern that the CIF price for imported kiwifruit, which has been steadily increasing over the last decade, may affect the market and consumption for kiwifruit in Japan in the future.

Grapefruit imports continued to decline, down 12 per cent year on year, largely due to its bitterness not appealing to Japanese consumers and concerns surrounding potential side effects when consumed with specific medicines.