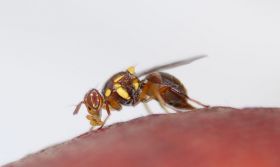 Biosecurity officials in Western Australia and South Australia are taking two different approaches in an effort to eradicate the highly destructive fruit fly.

In Western Australia, where new detections of fruit fly have been confirmed, quarantine zones have been set up in the Perth suburbs of Dalkeith, Claremont and Nedlands.

Surveillance has been boosted and more than 300 lure traps have been set, with organic insecticide also in use.

Residents near areas where the pest has been detected have been asked to remove anything that can provide a breeding ground such as citrus, stonefruit, olives, tomatoes, chillies and capsicums.

Western Australia agriculture and food minister, Alannah MacTiernan, said the aim was to protect the fruit and vegetable industries, which are worth about $1bn a year.

"We acknowledge that measures such as removing backyard fruit and fruiting vegetables will be tough for residents in affected areas, but we need to act quickly and decisively to minimise further loss," said MacTiernan.

"If we don't undertake these strong measures now to eradicate this pest, we place future production at risk - not only for our commercial growers but also for Perth residents wanting to grow fruit and fruiting vegetables in their garden,” she added.

In South Australia, where over 180 Adelaide suburbs are already included in a fruit-fly outbreak or suspension area, the state government has taken the next step to eradicate the pest, by releasing millions of sterile flies.

“The pest could have devastating impacts to our $1.3 billion fruit fly-vulnerable horticulture industry.

“For months now, we have had PIRSA staff on the ground in suburban hot spots, battling these flies,” he added.