Cordera, Pink Luster and Firecracker are the three latest varieties released under the US university’s breeding programme 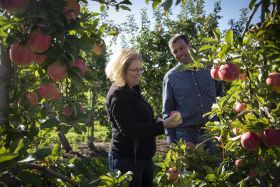 Brown said Cordera is a scab-resistant variety that retains its flavour and texture.  Mark Bowker, orchard crop expert of Wegmans Organic Farm, which has been trailing Cordera for five years, said its disease resistance was an attractive feature.

"Having access to the varieties that Susan Brown and Cornell are working on allows us to look into the future in a way that will hopefully expose our customers to new and unique food experiences," said Bowker.

"For us, disease resistance makes the performance of NY56 stands out in our orchard.  Of course, it always comes down to flavour, and we think it has that too.”